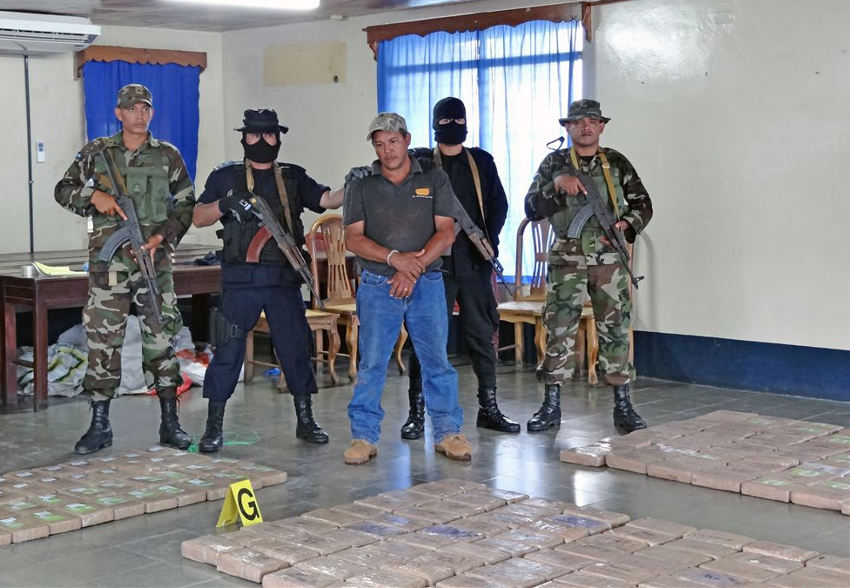 TODAY NICARAGUA NEWS – Nicaraguan police and military forces have seized more than 900 kilos of cocaine in four separate drug operations in Rivas province, on the country’s west coast near the border with Costa Rica.

“These successes are largely due to the professionalism and stability of the Nicaraguan Army and the Nicaraguan National Police,” said Paul Chavez, a security analyst at the University of the Light of Costa Rica.

National Police agents and Security forces seized 452 kilos of cocaine in one operation, on July 17, according to El Nuevo Diario. The confiscation, in the city of San Juan del Sur, is the biggest single drug seizure in Nicaragua so far in 2014.

In that operation, Nicaraguan police and Army soldiers arrested Antonio Ocon Silva, 46, who was allegedly driving a commercial truck loaded with bricks made of mud. Inside the truck, authorities found nearly 399 large packets filled with cocaine, according to the National Police website.

Security forces captured Ocon Silva at an Army checkpoint in Nacascolo. He was acting suspiciously, so authorities searched the truck, and found the packets. The contents of the packets tested positive for cocaine, according to La Prensa.

Earlier in July, Army soldiers and National Police agents collaborated on three other significant cocaine seizures in Riva province, which occurred on July 3, July 8, and July 16.

Security forces seized a total of 461 kilos of cocaine in those operations, which also led the arrests of four adult male suspects, according to El Nuevo Diario. Three of the men are Nicaraguan, and one is from Costa Rica.

The joint anti-drug operation is known as Operación Bastón.

Security forces made one of the seizures at the Nicaragua-Costa Rica Peñas Blancas border crossing.

The Peñas Blancas border crossing is the only land link between Nicaragua and Costa Rica. Authorities have made several large cocaine seizures at the checkpoint in recent years. For example, in early 2012, Costa Rican authorities seized four tons of cocaine at the border crossing, according to insightcrime.org.

The recent joint operations by Nicaraguan police and military are part of an effort by Nicaraguan authorities to stop drug shipments before they reach Costa Rica.

Nicaraguan authorities have stepped up the fight against drugs in targeted border areas and in rural regions, Col. Alberto Larios, leader of the Fourth Army Regional Military Command, told La Prensa. Nicaraguan security forces are using checkpoints to check the contents of vehicles.

“The Army is working very hard with the police,” he said. “This is resulting in an increase in drug seizures and arrests of people linked to organized crime groups.”

The professionalism of the police and Armed Forces makes it difficult for drug traffickers to operate in Nicaragua, Chavez said. “They have a high chance of being caught by security forces, or of having large amounts of their drugs seized.”

More than 80 percent of the cocaine which drug traffickers transport into the United States every year goes through Nicaragua, according to U.S. government Narcotics Control Strategy Report.

Nicaraguan police and Armed Forces conducted several counter-narcotics operations in 2013, mostly along the coasts and in the northern and autonomous regions, the report said.

Nicaragua and the U.S. are cooperating in the fight against drug trafficking.

For example, in 2012, Nicaraguan and U.S. authorities cooperated in an operation at sea which led to the seizure of 1,179 kilograms of cocaine, which had an estimated wholesale value of $32.5 million (USD).

The Nicaraguan Navy deployed two vessels to aid the U.S. Coast guard in the recovery of contraband that drug traffickers were transporting on a go-fast boat.

The U.S. Coast Guard cutter Valiant had been patrolling in the Caribbean Sea when it spotted and pursued the suspicious boat. The Valiant fired warning shots, which the operators of the boat ignored. A helicopter which was supporting the Valiant fired a shot which disabled the boat.

The seizure was part of Operación Martillo, a joint anti-drug effort between security forces from more than a dozen Latin American countries, including all seven Central American nations, several European countries, and the United States.

QCOSTARICA - Costa Rica will have a system called "Interceptor" that will eliminate floating and suspended waste from the upper layer of its waters,...
Trends