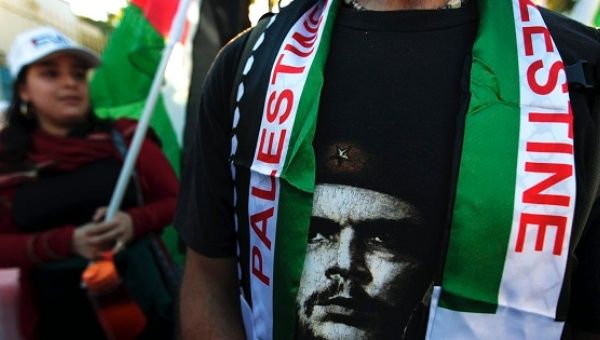 TODAY NICARAGUA (Telesur) Since taking office in 2007, Nicaraguan President Daniel Ortega has been a staunch defender of Palestine and a critic of Israeli human rights abuses.

As Israel continues to illegally expand its settlements on Palestinian territory, Nicaragua’s Sandinista government is hosting an international conference this weekend that will focus on strengthening ties between Palestinians living in Central America and those still living in Palestine.

The conference, which is themed “Building Bridges with the Palestinian Diaspora in Central America,” is being put together on the occasion of the upcoming 50th anniversary of the Israeli occupation of Palestine. Attendees will discuss strategies for supporting the Middle Eastern nation’s self-determination and independence, in light of Israel’s recent settlement expansion.

Vera Baboun and Nicola Khamis, mayors of the Palestinian cities of Bethlehem and Beit Jala, are expected to attend, the Costa Rica Star reports. Former Belizean Prime Minister Said Musa, a representative of the Palestinian diaspora in Central America, will also attend.

The United Nations and the Committee on the Exercise of the Inalienable Rights of the Palestinian People are co-hosting the conference in Managua.

“Following the opening session will be two panel discussions on the critical situation in Palestine as well as practical ways in which the Palestinian diaspora in Nicaragua, Honduras, El Salvador, Guatemala, Costa Rica, Panama, Belize and other countries in Latin America can coordinate initiatives, reconnect with the homeland, advocate for an end to the occupation and support sustainable development in Palestine,” the U.N. wrote in a statement, describing the event.

Central America has a decades-long relationship with Palestinian exiles.

Since the Israeli occupation that began in the 1940s, tens of thousands of Palestinians have been fleeing to Central America, making the region home to the second-largest Palestinian exile community in Latin America. Chile currently has the largest, with over 500,000 Palestinians living there, according to international human rights organization Global Exchange.

Honduras, Guatemala and El Salvador have Palestinian populations of approximately 250,000, 200,000, and 70,000 respectively, the same organization reports.

One of the most notable figures of the Palestinian Diaspora in Central America was Schafik Handal, a Salvadoran-Palestinian communist politician and former guerilla leader. Handal co-founded the country’s ruling Farabundo Marti National Liberation Front, FMLN, party. He laid the groundwork for party members Mauricio Funes and Salvador Sanchez to win the Salvadoran presidency in 2009 and 2014 respectively.

Since taking office in 2007, Nicaraguan President Daniel Ortega has been a staunch defender of Palestine and a critic of Israeli human rights abuses against Palestinians.

“(Israeli) Prime Minister Netanyahu appears to be possessed by the devil. He needs Pope Francis to exorcise it, to become appeased,” Ortega told Globovision in a 2014 interview.

“Why doesn’t anyone condemn or sanction the state of Israel?” Ortega asked, adding that Netanyahu wants to “annihilate the Palestinian people.”