Nicaragua: “There Are Decades Where Nothing Happens And There Are Weeks Where Decades Take Place” 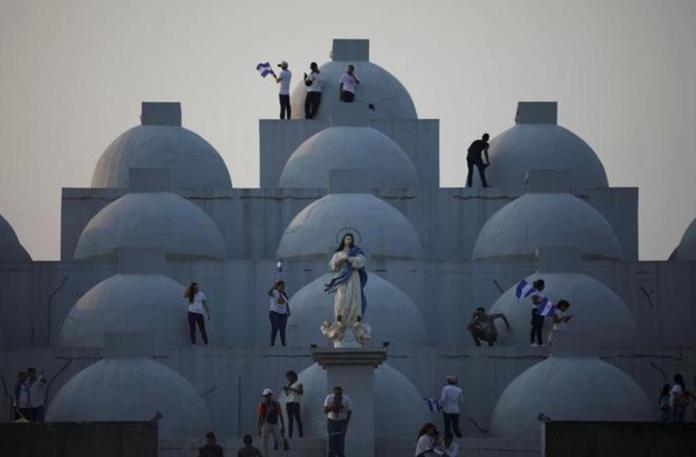 “From now on the History of Nicaragua is decided by the people and nobody else,” was the resounding message of Monsignor Silvio José Báez, launched on Saturday during the gigantic march of repudiation against the massacre of fifty young Nicaraguans, has two direct recipients: President Daniel Ortega and his wife, Vice President Rosario Murillo.

“We are outraged by so much pain, by so much death, Nicaragua deserves a better homeland and we will get it,” added the auxiliary Bishop of Managua, whose words recall the religious martyrs who sowed the Central American lands with their blood, from Óscar Romero to the Jesuits of Ignacio Ellacuría.

Báez has become the symbol of anti-government protests, which began when university students took to the streets against the reform of the Social Security Law, which was intended to cover the holes of corruption and patronage at the expense of money from entrepreneurs and workers.

The violent repression of police, riot police, paramilitary shock forces and the Sandinista Youth, in a script traced to the Venezuela of 2017, ended up transforming the student eruption into a general clamor against the Government.

The death toll varies between the 63 that the Permanent Commission on Human Rights has collected throughout the country and the provisional 42 from the Nicaraguan Center for Human Rights. There are still at least 15 young men and a few others fighting for their lives in hospitals. Figures that augment the excessive violence of the pro-government forces. In fact, since the government ordered not to act, there has not been one more victim.

“¡Que se vayan, qué se vayan!” (That they go, that they go) shouted those present against the government to interrupt the words of Cardinal and Archbishop of Managua Leopoldo Brenes Solorzano, who officiated the Catholic liturgy with Báez and other prominent members of the religious leadership.

“The people, united, will never be defeated!”, continued the huge crowd turned into one voice while the president of the Episcopal Conference gave details of the national dialogue, in which they will officiate as mediators and witnesses.

Something has changed, and much, in the Nicaragua in less than two weeks. Even in the ranks of Sandinismo an old phrase has been recovered, for which he claims to be a Sandinista, but not a ‘Danielista’.

“It is a feeling that runs through part of the bases of Sandinismo, which keep a distance from such terrible crimes, we are not the Sandinistas, it is the president, who has turned the Sandinista Front into a personal and family party,” denounced to El Mundo the revolutionary commander Hugo Torres, vice president of the Movimiento Renovador Sandinista (MRS).

What is happening today in Nicaragua? The Central American country is no longer the same one that started this year under the iron leadership of Ortega and his wife. For 11 years, supported by the triple revolutionary alliance with Venezuela and Cuba, Ortega redesigned the state to his own way with the intention that no modern version of Violeta Chamorro would defeat him at the polls as in 1990.

For the Sandinistas, Ortega created an alliance with the private sector, with the Catholic Church and with the United States while taking control of all the powers of the State.

As if he were a political sorcerer, Ortega began to mix the new factors in his potion of power, always with the support of Murillo and his children, who have been distributed among the media and many other perks. Until the spark in mid-April. Ortega, 72, reacted by repealing the Social Security reform law, ordering the reopening of censored media and the release of the imprisoned youth. Then he convinced the Catholic Church to lead a National Dialogue Table. The Bishops have accepted, but with conditions, knowing that even the Vatican failed in the negotiations of Venezuela.

Cardinal Brenes assured the demonstrators that he has given Ortega a one-month deadline. The first point of the detractors of Ortega is that there is no impunity for the crimes of these days. The second, an electoral advance to satisfy the thirst for change.

Students, civil organizations, businessmen and opponents have decided to participate in the dialogue, despite their suspicions that Ortega only wants to buy time. But the Auxiliary Bishop of Managua encourages them to participate. Báez has emerged as a key figure in today’s Nicaragua, compared to the collaborationism of previous Catholic leaders, such as the reviled Miguel Obando y Bravo.

- Advertisement -
Paying the bills
Previous articleRush To Get The Job Done On Time For The Transfer of Powers
Next articleViolence Crisis: 202 Homicides In 4 Months!