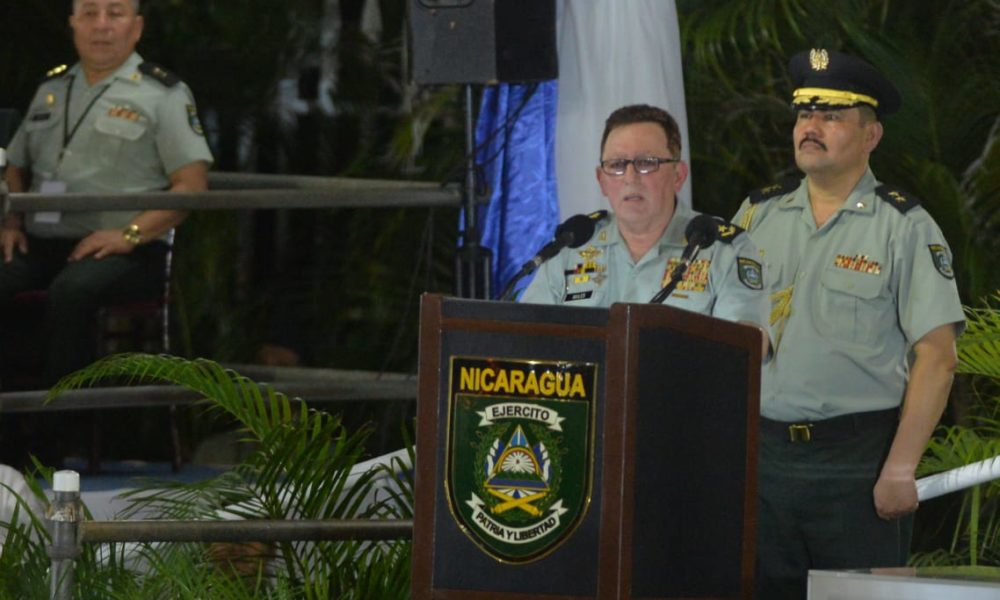 The head of the Nicaraguan Army, General Julio César Avilés Castillo, for the first time made his position publicly clear, in line with the official discourse, he considers the civil protests an attempted coup against the Daniel Ortega.

Aviles delivered a defensive speech against those who criticize the military institution, during the central act of commemoration of the 40th anniversary of the Army, held on Monday in the Plaza de la Revolución, in Managua.

Until this Monday Aviles had avoided referring, in his public speeches, to the civil protests that demand Ortega sted down from power.

“We have a strong, solid army, steeped in a thousand battles and highly cohesive. They will never be able to break us. They will never divide us, as officials of nongovernmental organizations who called on loyal members, to open the possibility of striking a coup d’etat to the legitimately constituted government, which we will never do,” said Aviles.

The protests began on April 18, 2018, over a failed social security reform, but then escalated to a demand for justice for the deaths caused by repression against protesters. At least 328 people died, according to the Inter-American Commission on Human Rights (IACHR). However, the Ortega government only recognizes 200 dead, of which it says where also 22 police officers and supporters of its government.

The Orteguismo attributes the crisis to a “failed coup d’etat”.

Aviles also called out those who “criticized” him, reproaching them “what they did do” in the appearance of the Army, after mentioning the “challenge” of choking out the fire of the Maiz Indian Reserve, one of the causes of civil protests in April 2018.

Civil organizations and note personalities from public life have demanded that the Army disarm armed groups that coordinate with the police to suppress the civil protests.

The general said there are campaigns of pressure, slander, lies and attacks on members of the Army and their families. He said he knows who “are behind that brutal campaign of attacks and provocations,” but said that should not be taken as a threat, because that is not his “intention.”

In his speech, Aviles reaffirmed the Sandinista origin of that institution and recalled his guerrilla years.

“Thus was born the then Sandinista Popular Army, today the Nicaraguan Army. This new Army was born from the struggle for national liberation. We were born fighting until victory. We were born fighting to live in peace. Thousands are part of it, the vast majority were guerrillas, who from a very young age were aware of the risk of losing their lives for the free, dignified, fair and prosperous Nicaragua that we all deserve,” said Aviles.

- Advertisement -
Paying the bills
Previous articleDengue continues to wreak havoc in Nicaragua
Next articleDid President Alvarado Sneak Out In An Ambulance To Avoid Protests? No.