A fugitive from Nicaraguan justice with two passports, one Costa Rican and the other Nicaraguan under two different names and differing birthdays, was arrested here. He is wanted in Nicaragua, accused of the attempted murder of his wife, a Nicaraguan prosecutor. 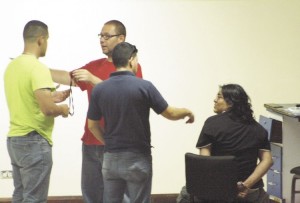 But he is also sought in connection with the 2006 shooting of a Costa Rican farm worker during an argument in Upala.

The national investigative agency OIJ said that Obando was arrested Saturday not 200 yards from where he allegedly killed Alexander Araya, 26, eight years ago. OIJ accuses Obando, during an altercation with Araya, of drawing a pistol and shooting the latter dead in the bar.

According to Nicaraguan authorities, Obando was detained as a suspect in the murderous attack on his wife. According to a Nicaraguan police official, Obando had threatened her with a knife the day of the attempted murder in November, 2012. But he escaped the jail in Jinotega that same month.

The Nicaraguan authorities added that his wife, Maribel Palmas, recovered fully from injuries suffered in the attack but goes everywhere protected by a pair of police officers since Obando’s escape from jail.

Q24N - Arriving in the Guatemalan capital about two hours late, after the plane in which she was traveling had to turn around due...
Redaqted

QCOSTARICA - The contagion rate of covid-19 in Costa Rica in the last week did not change, a fact that is seen for the...
Photos of Costa Rica