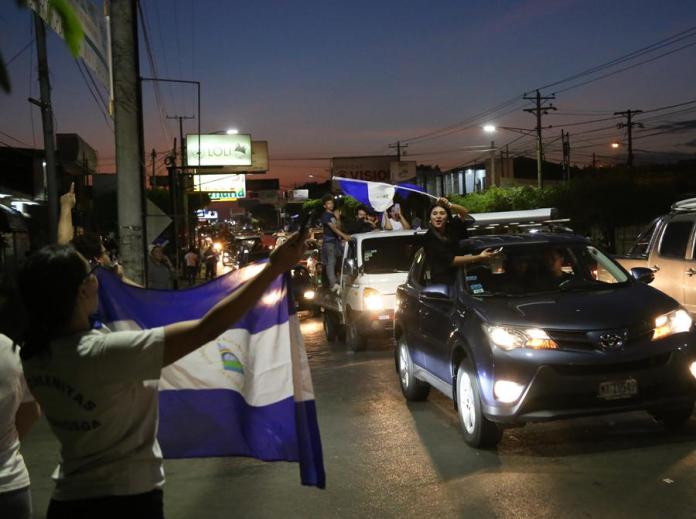 Nicaraguans, as they enter the seventh day of protests that have touched every corner of the country, continue on edge. The worst part is not knowing what is going to happen today or tomorrow. Much less of the future.

In six days of protests at least 28 people have lost their lives and hundreds more injured. Official figures are not available.

The crackdown on protests has also meant detentions. The university student group says in the past week 43 people have “disappeared”, with at least 20 believed to have been killed, the others being holed up in the prison, once a torture center for the Somoza regime.

The student group of the Universidad Politécnica de Nicaragua (Upoli) is demanding the release of all ‘political’ prisoners taken in the last several days, a Nicaragua free and president Daniel Ortega and his wife and Vice-president, Rosario Murillo, gone.

On Monday, the U.S. State Department ordered all relatives of US Embassy staff in Managua out of the country.

The pension reforms was the spark to the protests that began in Managua on Wednesday and have since taken root across the country.

But its not just about the pension reforms that have since been revoked by the Ortega government, there are long-simmering grievances over political stagnation, economic frustration and Ortega and Murillo’s authoritarian style of leadership.

Never, in the last 11 years of Ortega’s rule have there been such a massive protests and uprising of the people from all sectors, including the business sector that over the years benefited from their alliance with the Sandinista government, but today find themselves having to shoulder the social debt of the country.

Following Ortega’s personal call to peace and personally announcing the revocation of the pension reforms approved on April 16 by the board of the Nicaraguan Social Security Fund (INSS), the violence on Monday subsided, however the protests continued, even bigger than before as thousands of workers, pensioners and ordinary residents marched to the capital Managua to demand and end to repression.

The capital city was painted blue and white from the thousands of flags. “Afuera! Afuera! (Out! Out!) could be heard over and over, echoing the university students’ demand that Ortega and Murillo step down.

But Ortega has refused to bow down to demands to rein in the police. Late Monday, police raided the Polytechnic University of Nicaragua, the center of the student protests for the second night running. AFP photographers were on hand as witness.

“The protests are no longer just about the INSS (social security), it is against a government that denies us freedom of expression, freedom of the press and to demonstrate peacefully,” 26-year-old political science student Clifford Ramirez told AFP.

Few, fearing reprisals,  are willing to put their face and name forward as leaders to the protests, making it difficult for the Ortega government to dialogue with.

It was unclear where the wave of unrest will go.

The Vatican, U.S. and European nationals have all condemned the violence. UN Secretary-General Antonio Guterres called for restraint and urged Ortega’s government to “ensure the protection of human rights of all citizens, particularly the right to peaceful assembly and freedom of expression.”

Internationally, support for Ortega is crumbling, complicating his wielding of power in the country. On the positive side, Ortega’s rule has avoided the arrival of criminal gangs that are plaguing the northern Central American countries such as Honduras, El Salvador (both bordering Nicaragua) and Guatemala.

However, the economic situation in Nicaragua is not as rosy as the Ortega and Murillo team would have its people and the world believe. The INSS is in debt, one could say bankrupt. Corruption is rampant in the state institutions. The aid by Venezuela dried up some time ago.

The average Nicaraguan not a pro-supporter of the Sandinista government has no doubt in their mind that Ortega and Murillo have been drying up state resources to line their own pockets. Truth or not, important is that is the common sentiment of their leaders.