QCOSTARICA – From 1983 to 2013, on average some 460 girls under the age of 15 give birth in Costa Rica. This based on data by the National Institute of Statistics and Census (Instituto Nacional de Estadística y Censos – INEC).

According to Olga Araya, coordinator at the INEC, says since the year 2000 the fertility rate has been 2.5 births for every 1.000 girls between the ages of 10 to 14, a rate that has remained unchanged in recent years.

“What is alarming is that our 10 to 14-year-old girls are having children,” says Araya.

Both the Ministry of Health (Ministerio de Salud in Spanish) and the Interagency Commission on Care for Adolescent Mothers (Comisión Interinstitucional de Atención a la Madre Adolescente – CIAMA) have been implementing measures and develop training for both male and female adolescents, in the issues of sexual and reproductive health and where the implications of early pregnancy are discussed.

On Thursday (Feb. 5), Ana Teresa León, president of the national children’s Welfare service, the Patronato Nacional de la Infancia (PANI), said that this type of pregnancy may increase the risk of child abuse, since we are dealing with young girls not ready to be mothers, that can lead to rejection of the child and subsequently generate problems of neglect and violence.

Last Monday (Feb 3.) a two-year old died at the hands of her 16-year-old mother (and adult stepfather) from severe physical abuse. The couple also have a five month old child. Both are now in police custody as authorities continue their investigation into death of the toddler. 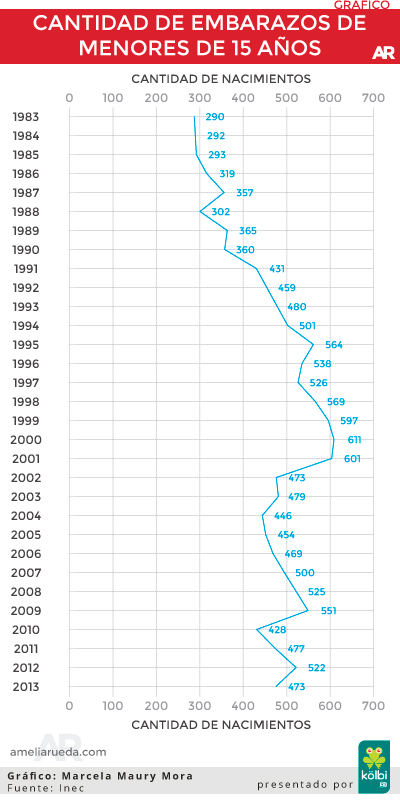