Opinion: Road Crew Paints Over Remains Of Dog Run Over 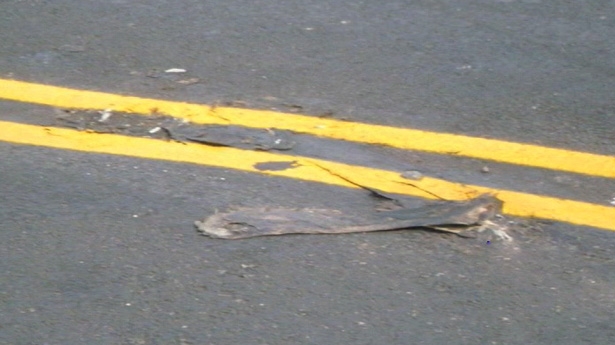 It is incredible but true, the paint crew working on Ruta 32 (San José – Limón) painted over the carcass of a dead dog. And right in front of the Oasis evangelical temple that was inaugurated on Sunday.

This was denounced by a businessman and resident of San Luis Santo Domingo de Heredia, who took photos and distributed them to the media and posted on Facebook.

The Consejo Nacional de Vialidad (CONAVI) – Road Safety Council – says “it is unacceptable”, blaming the incident on the carelessness of the work crew.

But, wait a minute, isn’t one of the responsibilities of the Conavi to keep the roads safe?

By the looks of the carcass, it had been lying on the street for months, a fact confirmed by the Heredia resident.

So, here we have the CONAVI blaming the work crew for a problem they have an even bigger role in? Where is taking responsibility for its actions or lack of?

There has to be someone at the Ministerio de Obras Publicas y Transportes (MOPT) with enough juice to establish a program of picking road debris, especially large items like a dead animal.

It is even more pitiful when you stop to consider that on this heavily transited route, daily Tránsitos (traffic police) – a division of the MOPT – patrol up and down and not one would report it to the CONAVI, which is also part of the MOPT?

In any event, blaming the road painting work crew is pure bullocks. The MOPT has to take responsibility that many road accidents are caused by bad roads, roads that are poorly designed, constructed and maintained. The have to take responsibility for faulty programs and/or the lack of.  Responsible for a lackadaisical attitude by a government agency that…

If anyone is to blame for this and many of other not so unusual situations is the current MOPT minister, Pedro Castro and the director of the CONAVI, Silvia Bolaños. And for good measure, the responsibility should also be borne by German Marín

The contract for painting the lines on the Ruta 32 was ¢169 million colones (US$345.000 dollars). A shovel and a plastic bag at the corner hardware store is not more than ¢20.000 colones.  The cost of fatal accident?

- Advertisement -
Paying the bills
Previous articleParents Should Inspect Buses That Transport Their Children to School
Next articleOn World Cancer Day, A Chance To Accelerate Efforts Toward A Cure