Analysis: Lawmaker Justo Orozco is unlike nearly all modern politicians. While US politicians making politically incorrect statements (such as two conservative Republicans in the 2012 elections) usually apologize for having their foot in their mouths, Orozco seems unaware that it’s even there. 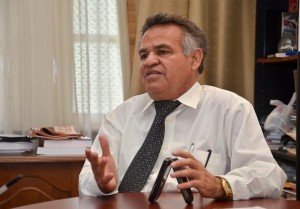 As if he needed to renew his homophobic credentials, in a Wednesday noon debate on Telenoticias (TV channel 7) with colleague Victor Emilio Granados of the PASE party, Orozco accused Granados of having a “closet mentality.” Knowing well Orozco’s very public homophobia, Granados was offended.

“Among other things, don Justo, in an offensive and even intimidating way, said he was expecting other lawmakers to come out of the closet,” said Granados. Instead of the very lame apology that usually follows such outbursts in the U.S., Orozco ducked a phone call from La Nacion for comment, saying, “I don’t think anything. Excuse me, I’m busy,”

It remained for Granados to explain the usage: “It is a slurring and discriminatory phrase always used against homosexual persons and even heterosexuals who support rights of persons of that orientation,” Granados explained.

Apparently, Granados has launched a campaign on Facebook with the name (in Spanish) “I also am coming out of the closet.” It appears that the offended deputy is using the phrase in an attempt to spread tolerance and understanding.

In late May, Orozco asked the Judical Affairs Committee of the Legislative Assembly to exclude (recuse was the word he used) lawmaker Carmen Muñoz on the grounds of her sexual orientation. This is the committee that will be debating the same sex rights bill.

In May, 2012, Orozco was then chairman of the Human Rights Committee when the bill came up before that body. The Evangelical chairman brought the bill to a lightning vote without discussion and effectively scuttled the measure. It remained for President Laura Chinchilla to revive the issue and send it to another committee this year.

But his latest manoeuvre failed miserably. His arguments for recusal rated high marks for creativity but failing ones in legality. He tried to apply the way that a judge with special interests in a case, is expected to recuse himself. The jump of applying judicial standards to the legislative branch just didn’t fly.

“Under that logic, one would have to also exclude Christian deputies like Orozco who consider Lesbianism a sin,” added Solis. There is no doubt of one thing: Orozco’s implacable opposition and at times ridiculous pronouncements have acted as a rallying point for the tolerant.

The bill before the lawmakers is relatively mild, not even mentioning the word marriage. It would grant inheritance rights and the ability to enter the hospital to visit a spouse of the same sex. It is simply granting legal recognition to partners living together as a stable couple.

Today, Monday, June 21, we are back to the two plates that cannot circulate, in today's case plates ending in 1 & 2 CANNOT...
Pura Vida