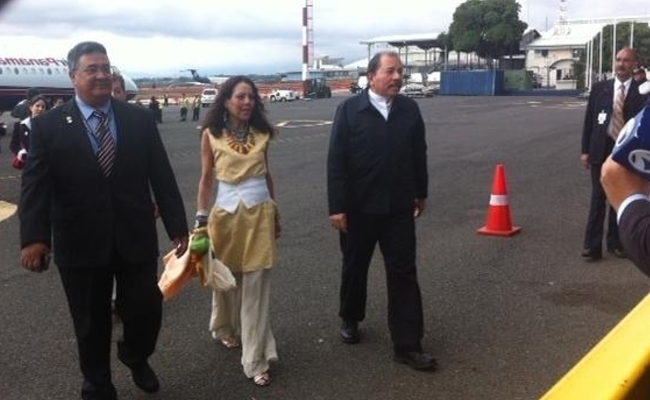 While the rest of the presidents of Central America, the Dominican Republic and U.S. president Barack Obama were already in the centre of San José, in typical Daniel Ortega fashion, the President of Nicaragua, accompanied by his wife, Rosario Murillo, arrived in Costa Rica at around 4:30pm, aboard an F-70 Air Panama flight.

Caught by surprise by the media, don Daniel assured that relations with Costa Rica are “normal”.

“In terms of trade, in terms of all that is the subject of Central America integration are working. And the issues that are controversial are where they should be in the International Court of Justice”, said Ortega.

The last time Ortega was on Costa Rican soil was the inauguration of Laura Chinchilla in May 2010.

Asked if he had a rapproachement with Chinchilla, Ortega showed the warmth of a good neighbour.

“With her I have not had any break. In different events we have met and have greeted each other. Today I have the opportunity to greet her again, she is our hostess”, he said trying to leave behind years of controversy, unanswered letters and statements in high pitch by the border conflict that has been ongoing since October 2010.

Just two months and 12 days have elapsed when Costa Rica hosted the summit of Central American countries and Mexico where Ortega was absent.

At the time the Nicaraguan President cited pending domestic issued that prevented him from travelling to Costa Rica. Attending the summit on Nicaragua’s behalf was Economy Minister, Orlando Solorzano.

With resepct to the matters highlithing his meeting with his counterparts in Central America and Obama, Ortega cited the fight against poverty as a “fundamental” theme.

“I think we have here the basic elements of the agenda for Central America and now have the opportunity today to share with the President of the United States, Barack Obama,” said Ortega.

Ortega and his wife were present at the “working” dinner meeting at the Teatro Nacional last night.

At the end of the event, around 9pm, Ortega did not offer any statemets to press. Shortly after the couple left for their country.

Costa Rica’s Foreign Minister, Enrique Castillo, assured that the subject of the Isla Calero border conflict was not a topic of discussion between Chinchilla and Ortega.

QCOSTARICA - The President of Costa Rica, Carlos Alvarado, described the persecution of Nicaragua President Daniel Ortega against opponents as reprehensible after the government...
Coronavirus

QCOSTARICA - No doubt, vaccines are one of the most powerful tools to maintain control of Covid-19, but when it comes to entire populations,...
Guatemala