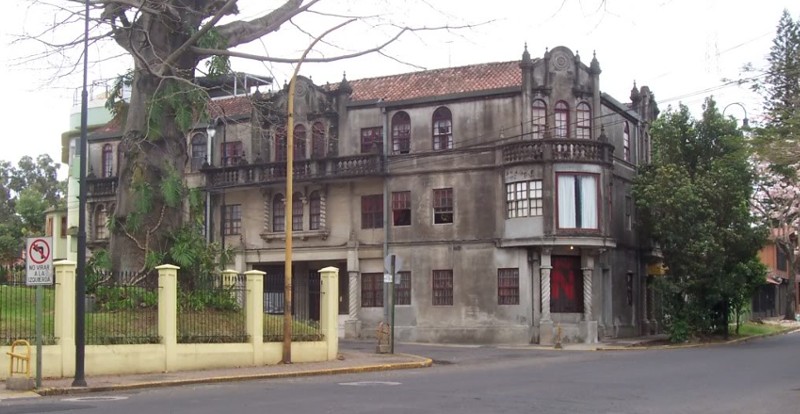 “We ask for your cooperation to inform us through 911 (indicating that it the CANCILLERIA code) any abnormal situation observed in your environment, any strange movements of people (on roofs, houses, neighbors, vacant lots) and any abandoned packages”.

The edificio Jimenez is located next Casa Amarrila.The yellow posts on are part of the Casa Amarilla fence.

This was the message taped to the door of the Jimenez apartment building located next door o the Casa Amarilla, who was receiving a very important guest, U.S. President Barack Obama.

Rose Marie Breedy, a resident of the building, in telling her story to La Nacion, described how Secret Service agents began last week with the inspection of the building, asking for data on each of the tenants and requeste authorization to place Marines in some of the balconies.

As the arrival of President Obama approached, vigilance of the area intensified in the area of Barrio Amón that is known for robberies, drugs, car thefts and transvestite prostitutes.

The wachimen and destitute that are part of the everyday landscape of Barrio Amón were replaced by huge men with a “hard to kill” face and others in dark suits and sunglasses.

On Friday, the bustle of vehicular traffic, the noise of motorcyclists who annoy the transexuals at night and even the daily drill used in the National Insurance Institute (INS) building restoration, yielded to the silence of a major operation involving explosive detection dogs, GI Joe style security agents and even snipers.

All took security very seriously. They even checked choir children of the  Escuela Buenaventura Corrales, who had been invited to sing for Obama, with metal detectors.

James Getman, a California native and living in Tiquicia for four years, was yet another viciem of the extreme vigilance.

From the terrace, across the Foreign Ministry, Gateman improvised a stage and with a guitar and speaker, had intended to serenate the President. “We live in a chaotic world, I wanted him to see that there is hope”, Gateman said before security agents prevented his concert.

Snipers sat atop the INS, the Holiday Inn Aurola and the Foreign Ministry buildings. On the arrival of Obama the residents were asked to go inside of their balconies and not to peek through the windows, as snipers “got nerovus with so much movement”. Since we igonred the warnings, within minutes police were sent to our balconies.

Nevertheless, despite the restrictions and the scare of the snipers, as curious neighbors we able take photos and save the memory.

QCOSTARICA - For today, Monday, September 13, despite being...
Cine (Movies)