Oscar Arias For President in 2018?

Front PageNewsPolitics
By Rico
14 May 2015 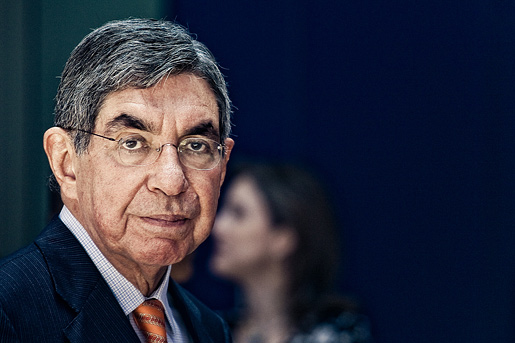 QCOSTARICA – Internally, within then Partido Liberación Nacional (PLN) party there is a growing number of people urging former president Oscar Arias Sanchez to seriously consider placing his name in the hat to run for president in 2018.

At least that is the word from two close friends of the former president speaking to Crhoy.com: Francisco Antonio Pacheco, former president of the Legislative Assembly and Jorge Arturo Sanchez, deputy minister of Housing in the 2006-2010 administration.

Although Pacheco said the although talks are informal, more jokingly, “jokes are never completely jokes and always have something serious behind them when insinuating something like this.”

According to Pacheco, “I, personally, think the country would be very beneficial because I see Costa Rica’s complex panorama and I think only one person with the stature of Don Oscar can help us move forward.”

For the former deputy minister, the subject of Arias returning to Zapote in 2018 is a matter of “political reality.”

Neither Pacheco nor Sanchez would name the names of the others who favour a Arias run in 2018. In its report, Crhoy.com’s Carlos Mora said he could not reach Arias for comment either by cell phone or at his home in Rohrmoser.

Besides the public comments of Pacheco and Sanchez, many are said to be behind a movement to back an Arias run in 2018. “Some have told him directly that he should run again for everything that is happening in the country,” Sanchez said. 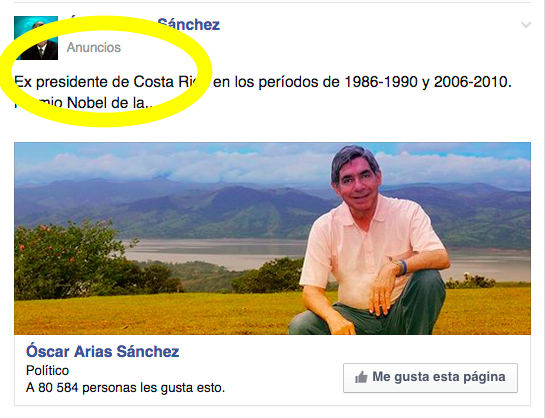 On Facebook, for example, circulating are a lot of paid advertising to promote the Arias official page.

In 1987 , he was awarded the Nobel Prize for peace for his efforts to end the Central American crisis. He is also a recipient of the Albert Schweitzer Prize for Humanitarianism and a trustee of Economists for Peace and Security. In 2003, he was elected to the Board of Directors of the International Criminal Court’s Trust Fund for Victims.

In late 2013, Oscar’s brother, Rodrigo Arias, withdrew from the PLN nomination for presidential candidate, paving way for a failed bid by Johnny Araya‘s failed president bid in the 2014 presidential elections.

About re-elections in Costa Rica  (from Wikipedia)
In September 2000 the Constitutional Court rejected an argument by former president Arias that a 1969 constitutional amendment banning presidential reelection be rescinded. Arias thus remained barred from a second term as president; however, in April 2003–by which time two of the four judges who had voted against the change in 2000 had been replaced–the Court reconsidered the issue and, with the only dissenters being the two anti-reelection judges remaining from 2000, declared the 1969 amendment null and thus opened the way to reelection for former presidents–which in practice meant Arias.

Q24N - Millions of Brazilians marched this week in...
Front Page