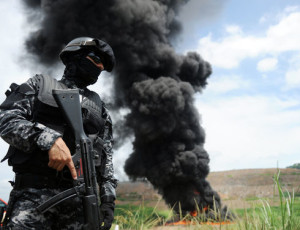 The National Aeronaval Service Station in Coclé, in the central region of the country, will complement the public safety work carried out by the National Police on land.

Providing security to increase tourism in Panama is one of the government’s main goals, which is why officials approved last September the construction of a new aeronaval base in the coastal sector of Juan Hombrón in the province of Coclé, 150 kilometers west of Panama City.

Panamanian authorities incinerate some of the 41 metric tons of narcotics they seized in 2013. A new aeronaval base will reinforce the security work being carried out by police in the central province of Coclé to fight narco-trafficking. (Rodrigo Arangua/AFP)

“The increase in tourism activity in the province of Coclé led us to decide to install this new base, which will complement the public safety work being carried out by the National Police units,” Panama Public Safety Minister José Raúl Mulino said.

The base, which cost US$5 million, is among 20 stations built by the Ministry of Public Safety since 2012, along both the Pacific and Atlantic coasts, to monitor large areas of coastline that could be used for the drug trade or other illegal activities, according to Mulino.

“[Building the base in Coclé] is an important component of the efforts that the Federal Government is making to ensure the country is safer for its citizens,” Panamanian President Ricardo Martinelli said last September.

In 2013, authorities seized 41 metric tons of narcotics, mostly cocaine, after 35 metric tons were seized in 2012, according to the Integrated System of Criminal Statistics.

The base in Coclé, which is expected to be ready by April, will be operated by the National Aeronaval Service (SENAN).

Coclé is among the most naturally and culturally rich provinces in Panama, according to Ernesto Orillac, the deputy minister of the Tourism Authority of Panama (ATP).

Located in the geographic center of the country, travelers can enjoy a temperate climate in the Antón Valley, an ancient volcano that’s now a fertile valley 600 meters above sea level, with an average temperature of 18°C throughout the year.

Local attractions include the following:

The central province, which is home to 245,132 residents – from among the country’s total population of 3.8 million according to the National Statistics and Census Institute – has registered an increase in visitors following last November’s opening of the Scarlett Martínez International Airport in Río Hato in the Antón District.

“Given the wave of economic changes that’s now sweeping through Coclé, we need to strengthen basic services such as public safety, health and education,” Provincial Gov. Juan Carlos Rodríguez said.

Mulino said the isthmus has become one of the main destinations for recreation and tourism investment in Latin America.

As projects are completed that facilitate tourists’ mobility, the number of visitors to the provinces is expected to increase.

Orillac said the Scarlett Martínez International Airport in Río is just 10 minutes from beach resorts, which have a capacity of 2,500 rooms.

With the improvements to accessibility, the hotel capacity is expected to reach 4,000 rooms, given the interest of international chains such as Riu and Marriott in establishing themselves in the area.

“In light of the expected increase in tourists, the installation of the aeronaval base is important to ensure comprehensive security,” Orillac added.

The government has spared no effort in terms of public safety, investing about US$2 billion since 2009.

The funds have been used to acquire technological equipment, train human resources in public safety issues and improve civilian defense, as well as construct police and aeronaval stations for land and sea surveillance operations, Mulino said.

María Luisa Dutari, the manager of the La Pradera hotel in Penonomé, the capital of the Coclé province, said the increased police presence is appropriate given the high-occupancy rates at the area’s hotels, which have been caused by the influx of tourists.

“Three years ago, the hotel occupancy rates began to improve considerably and the same thing is happening in all of the districts of the province of Coclé province,” she said. “The more security, the better it is for residents and visitors.”

- Advertisement -
Paying the bills
Previous articleFormer President Rodríguez NOT Going to Trial in PWS Case
Next articleColombia: The miracle of earthworms and quinoa