“Picosatellite” Promises To Put Costa Rica On the Aerospace Map 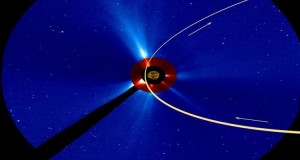 A miniaturized or small satellite (picosatellite in Spanish) is sure to take Costa Rica out of this world with the launch in 2016 by the Asociación Centroamericana de Aeronáutica y del Espacio (ACAE), with the support of strategic partners such as the  Instituto Tecnológico de Costa Rica (TEC) –  Technological Institute of Costa Rica, and Ministerio de Ambiente y Energía (Minae) – ministry of the Environment and Energy.

The announcement was made at Casa Presidencial, in Zapote, on Tuesday by Presienta Laura Chinchilla.

The ACAE has been working on the mini satellite since 2009. Through research and releases of air balloons, it promotes the development of an aerospace industry in the region. On its Facebook page, the ACAE says its vision is to “inspire Central American talent in the development of aerospace and related technologies”.

However, the ACAE is also planning to use the mini satellite as a tool to collect valuable emissions data to meet Costa Rica’s objective of becoming “carbon neutral”.

“There aren’t many nations with this capability (to launch a satellite), this definitely means Costa Rica will join countries with aerospace research capabilities,” said Sandra Cauffman, Costa Rica’s very own, who is project engineer and deputy director of NASA’s Mars Maven project.

Cauffman explained that the mini satellite is important in terms of strategy as it provides an advantage. “In the long term it could eliminate the dependence of the exchange of certain information with foreign countries and to ensure the security of information.”

The TEC will be responsible for the sensors inside the satellite and to maintain the infrastructure that will allow it to collect information and sending back to the research centre.

The cost of the developmnet of mini satellite is US$1.5 million dollars. According to Julio Calvo, director of the TEC, the human capital investment will drive the innovation.

The launch of the mini satellite will have to take place in another country, because Costa Rica does not have the infrastructure to carry out such a task.

In addition to the TEC, former Costa Rican astronaut and head of the Ad Astra Rocket (currently in the development of a plasma engine for NASA), Franklin Chang and Sandra Cauffman are key to a possible NASA launch and financial support for the project. The launch could also be made with the hiring of a private service, explained Calvo.

Today, Monday, June 14, vehicles with plates ending 1 & 2 CANNOT circulate The measure is countrywide and applied between 5:00 am and 9:00 pm,...
Photos of Costa Rica

Today, Thursday, June 10, only ODDS can circulate. The measure is countrywide and applied between 5:00 am and 9:00 pm, save for those under the...
Latin America

Today, Saturday, June 12, only ODDS can circulate. The measure is countrywide and applied between 5:00 am and 9:00 pm, save for those under the...
Peru