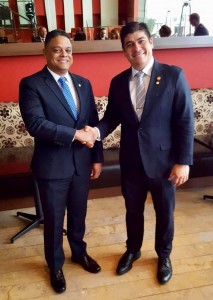 In Colombia for the inauguration of that country’s new president, Ivan Duque, Costa Rica president Carlos Alvarado met with the Prime Minister of Curaçao, Eugene Rhuggenaath, for talks about relations between Costa Rica and the Kingdom and especially Curaçao.

During the bilateral meeting, with also the presence of Vice President and also Foreign Minister, Epsy Cambell, it was agreed that Costa Rica and Curaçao will cooperate by sharing knowledge and experience about the poverty reduction project in Costa Rica, Agenda 2030 and the ‘sustainable development goals’. The countries will also look at structural possibilities to strengthen economic relations.

The heads of state also discussed the accreditation of universities in Costa Rica and soon a committee of Curaçao will travel to the Central American country to visit the universities. Finally, they discussed the further cooperation under the San José Convention against organized crime in the wider Caribbean region.

- Advertisement -
Paying the bills
Previous articleCrisis in Nicaragua has left 70,000 people unemployed in the tourism sector
Next articleEast Bengal Had The Resources To Buy Johnny Acosta, But Couldn’t Arrange For An Interpreter