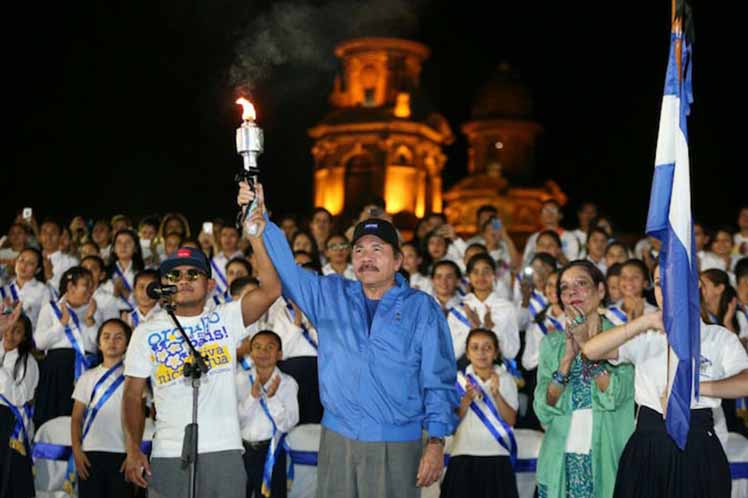 (Today Nicaragua) Nicaragua’s President, Daniel Ortega, called for the unity of Central America, after receiving the torch of freedom during an emotional cultural event attended by a 600-voice student choir.

‘This is the message this tour has left us and the most important thing is that the youth of the region have brought this message, of the need for Central American union,’ Ortega said in reference to the torch.

The regional symbol entered the country on Saturday, September 10th, from Honduras and will be delivered to Costa Rica on Tuesday.

‘The Central American Union is necessary to make the region stronger, in order to bring its peoples more welfare, culture, education and health,’ Ortega added.

Rosario Murillo, Coordinator of the Communication and Citizenship Council, as well as government officials, students and young people known for their integrity, also attended the cultural activity.

The torch, which has been traveling through Central America since the early 60s represents the freedom and independence of the people; it will travel 503 kilometers in Nicaraguan. It will be carried by 12,800 young people from the Federation of High School Students and the ‘Alexis Arguello’ Sports Movement.

Artistic and cultural festivals are also being held in departmental and municipal capitals during its passage through different regions of the country.

Subsequently, the flame will be handed over to the education authorities of Costa Rica at the border of Peñas Blancas.

The torch has been traditionally carried by students. It has been received by government officials in each border country in the region, as a symbol through which they seek to preserve freedom and peace.

Central American countries will commemorate 195 years of independence from Spain on September 15th.

- Advertisement -
Paying the bills
Previous articleOnly 11 Delegations Are Attending NAM Summit, Legislator Says
Next articleCuba Connects To The Outside World