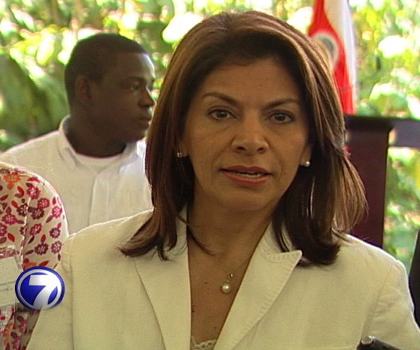 All alone in her support of the San José-San Ramón road reconstruction contract with the Brazilian firm OAS, Presidenta Laura Chinchilla, had to back peddle on Monday, announcing that the concession contract would be rescinded. And with that on Tuesday promised that it would not cost the country not “one colon”.

It was on March 11, when the Presidenta and her Transport Minister, Pedro Castro, announced the concession contract to OAS, the Brazilian construction company that we quickly learned was involved in allegations of corruption in other countries.

And it was the Presidenta who, on that day on March 11, predicted strong opposition, but promised to fight at all levels to ensure that project would proceed.

As the days and weeks passed, however, popular discontent grew steadily and her support for the concession, began to erode quickly. Chinchilla knocked on many doors: chambers of commerce, met with local mayors, asked the universities for input, as well as that of the technical colleges.

Following last weekend’s meeting with representatives of the OAS, Presidenta Laura Chinchilla, in her televised public address on Monday, announced to the country that the deal was dead.

And although the Presidenta promises the cancellation will not cost anything, the price tag in fact is US$30 million dollars.

According to Presidenta, the Brazilian company will not take legal action  for compensation for los of earnings, which is estimated at US$600 million dollars.

The government, however, will foot (compensate) OAS for up US$30 million dollars it has spent on the concession project. “We will verify all expenses and pay out only those that the company incurred”, says Chinchilla.

Planning Minister, Roberto Gallardo, explained that to pay OAS the government will make a thorough review of documents and a form a commission of experts in infrascture and finance to analyze the case.

Now the government is said to start process of receiving proposals for design and economic feasibility for the reconstruct the 58 kilometres of road between La Sabana in San José and San Ramón.

The largest of the opponent groups, Foro del Occidente, is expected to continue its fight to ensure that road is one that serves the community and not the interest of the politicians and foreign companies.

- Advertisement -
Paying the bills
Previous articleBotica Solera Gets A Facelift
Next article4.7 Quake In Limón This Morning

QCOSTARICA - With the intention of protecting minors, a...
Cine (Movies)