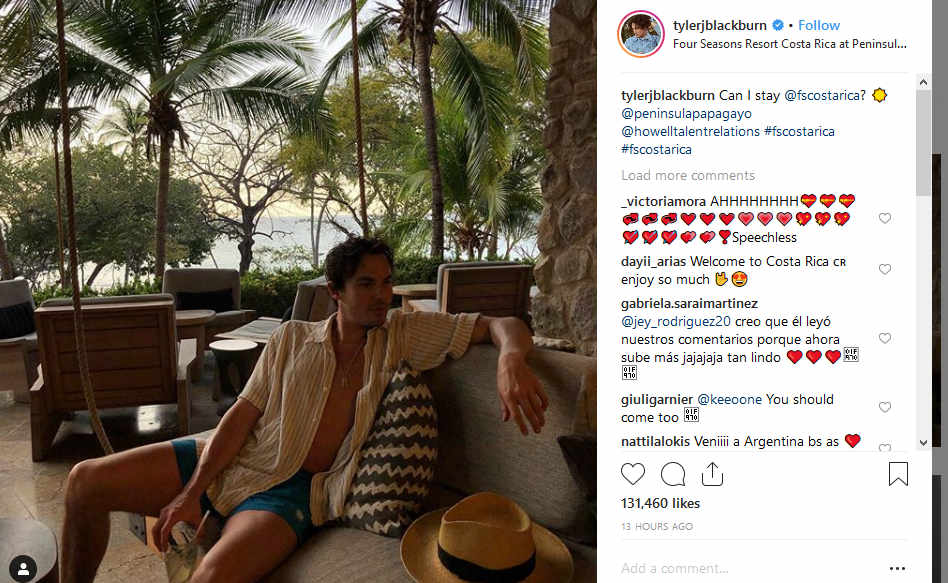 CONFIDENTIAL – American actor Tyler Blackburn is visiting Costa Rica and has a shared a naked photo of himself ‘au naturel’ while enjoying a Costa Rican sunset in one of the country’s poshest hotels.

The young actor, singer and model, best known for playing Caleb Rivers on the hit Freeform series Pretty Little Liars and its spin-off, Ravenswood – arrived in Costa Rica on February 15, confirmed the Press Office of Migration and Immigration. He has not yet left the country.

Tyler is staying at the Four Seasons hotel on the Papagayo Peninsula, considered one of the most expensive and exclusive destinations in the country.

“Trying to feel at home,” he wrote in a photo published on Monday in which he appears to be watching the sunset in front of the sea, completely naked.

Several of his friends have also shared images of their vacations in Costa Rica, bathing in the nude beach, drinking tequila and cocktails, among other things.

The photo caused a sensation among his 7.2 million followers and already accumulated more than 482,000 likes.

The second photo published on his Instagram profile was labeled the Four Seasons Hotel on the Papagayo peninsula, a destination that has been frequented by different celebrities over the years.

See all the photos at COSTA RICA CONFIDENTIAL!

Life comes at you fast when you’re a teen...
Politics