COSTA RICA NEWS — The section of the Ruta 27 (San José – Caldera) near La Guacima exit, became a raging river Wednesday afternoon, as rains coming off the slopes broke the retaining concrete barrier, stopping traffic in both directions for hours.

The road, a major transit route between the Central Valley and the Pacific Coast, and with less than five years in operation has been mired with problems every rainy season. 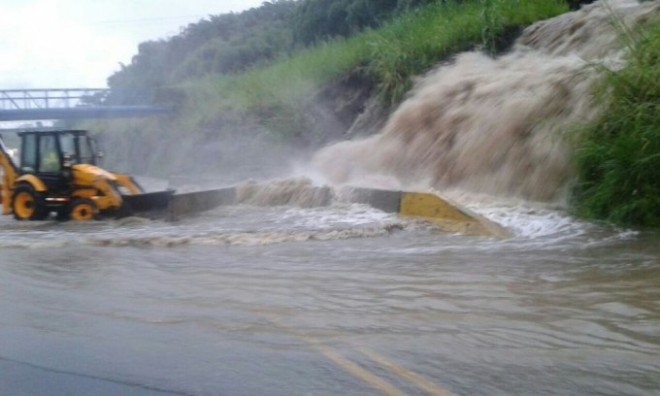 “A highway cannot be in the hands of mother nature,” said Guillormo Loría, director fo the roads and infrastructure at the  Laboratorio Nacional de Materiales y Modelos Estructurales (Lanamme), run by the Universidad de Costa Rica.

Yesterday’s closure is just one of the many that have occurred during the life of the highway, the worst, forcing a closure of more than two months, was within the first year of operation.

The heavy rains of the last couple of days began to accumulate in the ditches that was the cause of the overflow yesterday.

A motorcyclist was saved by a mere three seconds of being crushed to death when the embankment gave way. as seen by the amateur video posted on the social media.

The Ruta 27 was finally re-opened last night around 7:00pm.