The impact of the storm will be greatest today, Thursday. Authorities ask to be alert to areas prone to flooding or landslides. 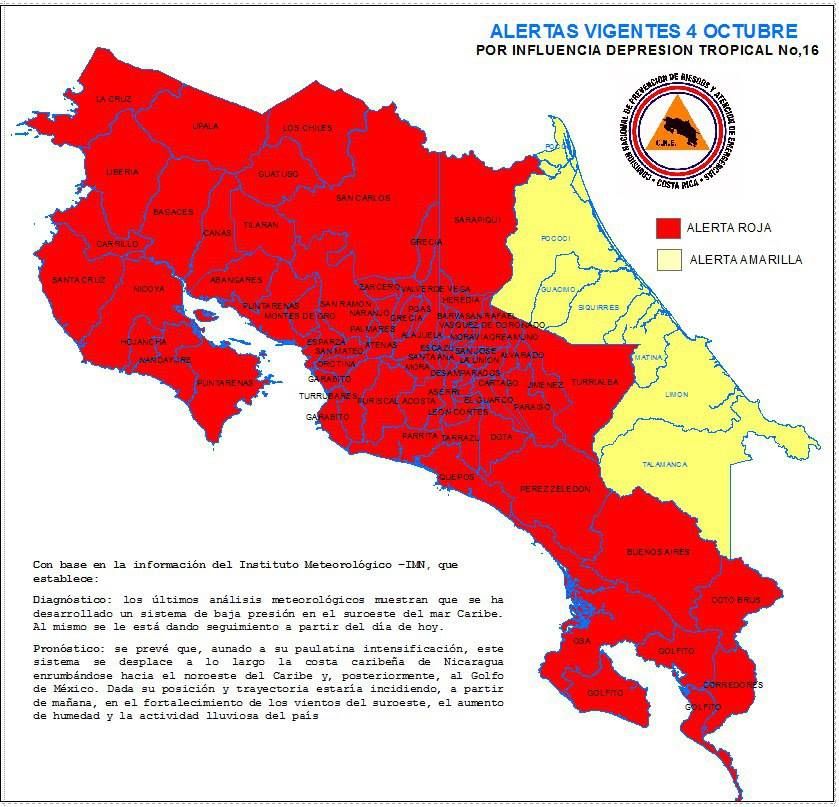 The National Emergencies Commission ( Comisión Nacional de Emergencias – CNE) declared a red alert for the entire Pacific coast, Central Valley and northern zone and a yellow alert in the Caribbean due to the influence of the tropical depression number 16 that over Costa Rica.

The atmospheric phenomenon, which formed in the southwest of the Caribbean Sea, 280 kilometers off the coast of Limón, already has caused flooding in four cantons of Guanacaste and forced the removal several families in Desamparados. It’s impact to intensified Wednesday afternoon, with downpours into the night and expected to continue all day Thursday.

The National Hurricane Center reported torrential rainfall from Sirpi bay in Nicaragua to Castilla in Honduras, with sustained winds up of 55 km/h. In addition, it is not ruled out that in the next few hours it will become a tropical storm.

Juan Carlos Fallas, director of the National Meteorological Institute (IMN), explained that it is not necessary for a tropical storm to form (which is more intense than a tropical depression), to feel the repercussions, taking into account elevated levels of rain was recorded for Septemeber.

“With the saturation of soils that exist there is a call for an alert to the population to monitor river levels and the surrounding lands around their houses and to heed to the warnings,” Fallas said.