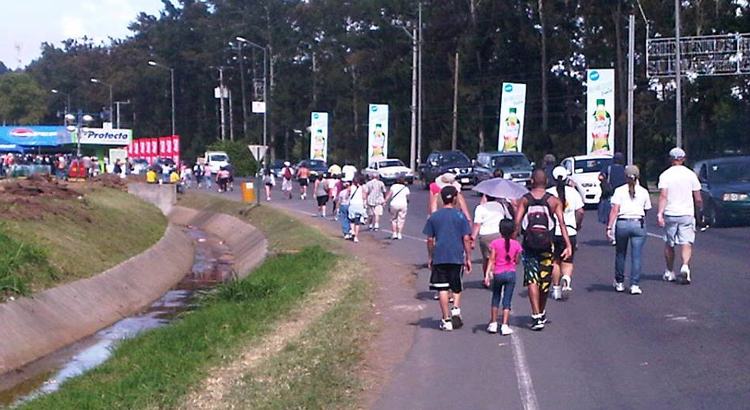 The Romeria 2013 is underway. Though the major days for the traditional walk to Cartago is on August 1 and 2, thousands have are taking advantage of the good weather this weekend to make their trek.

A Romería in Spanish or “Romaria” in Portuguese is a religious pilgrimage. The word “Romería”/”Romaria” comes from “romero”/”romeiro”, meaning those travelling towards Rome. It is a Catholic celebration that consists of a trip or peregrination (in cars, floats, on horseback or on foot) that ends at a sanctuary or hermitage. It is not necessarily always a trip, but in some cases a celebration that lasts all day long.

One of the most famous examples of a romería is that of Nuestra Señora del Rocío, in which the faithful move to the Sanctuary of the Virgen del Rocío in the village of the Rocío, in Almonte, Huelva. The Romería of the Virgin of Navahonda, celebrated in spring in the Madrilenian municipality of Robledo de Chavela is representative of this tradition. There are Romerias also in The Canary Islands. An example is La Romeria de Santiago Apostol, en Gáldar.

The New World. Another representative example, in Mexico, is the Romería of the Our Lady of Zapopan, which this considered the third most important peregrination in the country, after the one of the Virgin of Guadalupe, and the Virgin of San Juan de los Lagos. The Romería of the Virgin of Zapopan consists of a route 8 km in length, from the metropolitan Guadalajara Cathedral, to the Basilica of Our Lady of Zapopan. It is made every 12th of October, and figure of the virgin goes accompanied by more than 3,000,000 people.

In Costa Rica, it is traditional to make a Romería to Cartago on August 2 to make requests and give thanks to the Virgin Mary black statue, affectionally nicknamed La Negrita, located inside the cathedral. People all over the country and even other Central American countries attend to it by foot or horse.

According to the Catholic Church, some 2 million faithful will make the trip to Cartago by next Friday.

The Q has a special section – Romeria 2013 –  with articles and information on the Romería.

If you plan on participating in the Romería this year, La Nacion is offering a special service, http://www.nacion.com/romeria an interactive map accessed from your mobile device (phone or tablet) that tells you the distance you still have to go to the Basilica, and the location of Cruz Roja (Red Cross) stations, police posts and recycling bins.

- Advertisement -
Paying the bills
Previous articlePhoto of The Day: Nicoya´s Parade of Cultural Emblems
Next articleWe Must Reverse The Culture of ‘Do As I Please’ On Our Roads