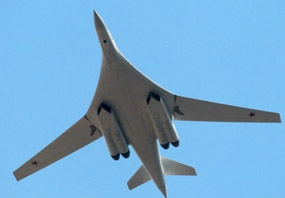 The head of the Russian long-range air force, Anatoli Zhijarev, confirmed today here that Tu- 160 strategic bombers will fly in South America as part of the patrolling plan to remote areas of the Ministry of Defense. Lieutenant General reported that two aircrafts of remote destination Tu- 160 began their mission along the Norwegian coast , flew over the Straits of Iceland and the UK, crossed the Atlantic and landed in Maiquetia Airport in Venezuela.

Speaking at the conclusions of the two-days inspection meeting by the Russian strategic nuclear forces, the officer showed the route continued by the aircrafts in the Western Hemisphere, according to ITAR-TASS .

They also flight over the Caribbean and landed at the airport in Managua, Nicaragua, according to the combative training plan of the Russian Air Force,he stressed.

The pilots rest in Nicaragua and get ready for a series of planned patrol flights over the region, noted the officer.

Zhijarev highlighted that Russia currently modernizes its strategic bombers to increase its output capacity and other tactical and technical data, as well as improve efficiency in the use of the weapon.

The Defense Ministry, meanwhile, clarified in a note delivered to the press that all the Air Force flights are made in strict accordance with international standards for the use of the airspace.

The presence of the Tu-160 in Managua coincided with the arrival to Nicaragua of the Russian secretary of the Security Council; Nikolai Patruchev, who signed a memorandum of cooperation along with the Commander General of the Nicaraguan Air Force, general Julio Cesar Avilés.

Without giving details of the text, Patrushev stated that the leadership of the Nicaraguan Army and Russian Security Council will establish permanent consultations to coordinate positions on the major international issues and increase cooperation.

QCOSTARICA - Within the framework of the B2B Forum...
National