The Constitutional Court ruled in favour of an action against the articles of law in the previous Ley de Transito (October 2008) that set a fine of ¢108.000 colones for not carrying the necessary equipment to change a tire, a set of jumper cables, took kit and first aid kit. 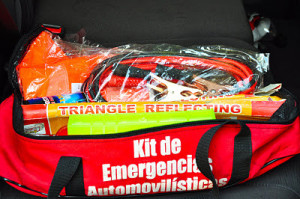 The Court ruled the fine, 30% of a basic monthly salary, disproportional and excessive considering the economic conditions of most the population in Costa Rica. The Court also clarified that requirement to have on hand the equipment as reasonable, but not the fine.

The Court ruling only affects those who appealed their ticket under the previous law.

Carlos Rivas, legal counsel to the Consejo de Seguridad Vial (Cosevi) explained that the current law (in effect on December 2012) does not require the kit and tools and that drivers who lose their appeal will be required to pay only the ¢2.000 colones fine set out in the traffic law prior to 2008.

Rivas also said that for those drivers who paid their fines – the ¢108.000 colones – they will not be getting a refund on any fines already paid.

The current traffic law set out a fine of ¢20.000 colones for a driver in a vehicle that does not have a spare tire and the tools to change it. The tool kit, fire extinguisher, reflective vest and first aid kit is not required.

QCOSTARICA - The investigation into alleged bribery of public officials in exchange for contracts for road works, received help from informants within the Consejo...
Reports