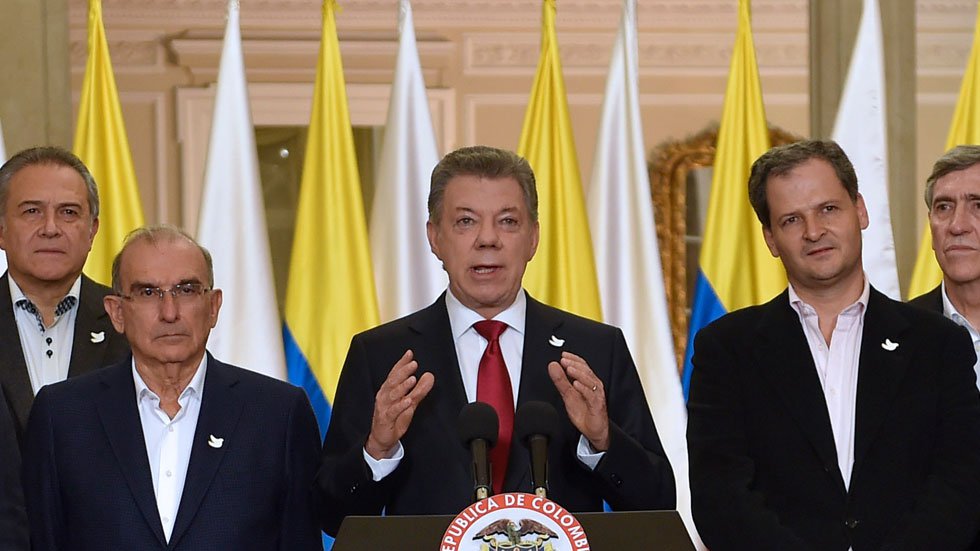 The president couldn’t have faced a more divided Colombia and the losing of the referendum couldn’t have come at a worst time, one day before FARC guerrillas would actually begin leaving their jungle camps to demobilize.

The vote left the country in a state of bipolar chaos; While opponents of the peace deal were celebrating, those who had begun seeing light at the end of a 52-year tunnel of armed conflict were devastated.

The outcome surprised all Colombians as pollsters over the past weeks consistently predicted a landslide victory for the “Yes” camp.

In order to maintain order and reaffirm his authority, President Juan Manuel Santos took to national television shortly after the results to tell the country “I am the president of all Colombians. Of those who voted ‘No’ as well as those who voted ‘Yes’, of ALL Colombians.”

After admitting his defeat, “be it by the tiniest of margins,” Santos said that “as the head of state, I am the guarantor of the stability of the nation and this democratic decision may not affect the stability I will guarantee.”

The president said the definitive and bilateral ceasefire with the FARC “remains in force and will remain in force.”

However, the FARC’s demobilization and disarmament that had already begun must be put on hold, leaving the country’s largest armed group in limbo and under imminent threat of rival armed groups.

Santos convoked all political parties for Monday, “particularly those who today manifested themselves in favor of the ‘No’” vote “to hear them, to open spaces for dialogue and determine the path to follow.”

The president said he would send his top negotiators back to Cuba to immediately inform the FARC about the results of the emergency meeting with the political parties.

With his speech, Santos put the ball in the court of his political arch rival and the main critic of the peace deal, former President Alvaro Uribe, who has consistently refused to talk to Santos in spite of numerous mediation attempts, reportedly including US ambassador Kevin Whitaker.

In case Uribe’s party continues to refuses to reconcile, Congress would still be able to overrule Sunday’s referendum and return Santos the faculties needed to proceed with the process in legal disregard of the referendum outcome.

However, this would likely make the situation in the country more explosive as it already is as tensions between supporters and opponents of peace are high.

FARC leader Rodrigo Londoño, a.k.a. “Timochenko,” said on Twitter he felt “the support of the nation.”

The guerrilla chief, however, made it clear that the FARC wants to be included in the debate that follows the referendum as a political movement and not an illegal armed group as formally agreed in the peace deal signed only six days ago.

But with the peace deal now officially off the table this is hardly likely.

- Advertisement -
Paying the bills
Previous articleTo Hell with the Venezuelan People, Revolution Is the Goal
Next articlePeace in Colombia Could Mean Violence in Venezuela