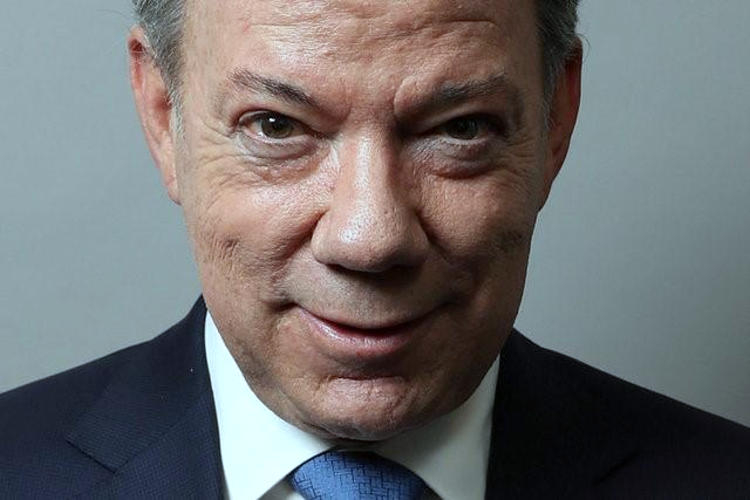 (Reuters) OSLO/BOGOTA – Colombian President Juan Manuel Santos won the 2016 Nobel Peace Prize on Friday for his efforts to end a 52-year-old war with Marxist guerrillas, a surprise choice and a show of support days after voters rejected a peace deal he signed with the rebels.

The Norwegian Nobel Committee said Santos had brought one of the longest civil wars in modern history significantly closer to a peaceful solution, but there was still a danger the peace process could collapse.

The award excluded FARC guerrilla leader Rodrigo Londono, better known by his nom de guerre Timochenko, who signed the peace accord with Santos in Cartagena on Sept. 26.

Santos has promised to revive the plan even though Colombians narrowly rejected it in a referendum on Sunday. Many voters believed it was too lenient on the FARC guerrillas.

“There is a real danger that the peace process will come to a halt and that civil war will flare up again. This makes it even more important that the parties … continue to respect the ceasefire,” the Norwegian Nobel Committee said.

“The fact that a majority of the voters said ‘No’ to the peace accord does not necessarily mean that the peace process is dead.”

More than 220,000 people have died on the battlefield or in massacres during the conflict between leftist guerrillas, government troops and right-wing paramilitaries.

Millions have been displaced and many beg on the streets of the capital, while economic potential has been held up in the mostly rural nation.

“I infinitely appreciate from all of my heart this honourable distinction, not in my name, but the name of all Colombians, and especially the millions of victims that have been left by the conflict we have suffered for more than 50 years,” Santos, 65, said in a brief statement on television.

The committee released audio of the winner being informed of his award. In it, Santos sounded moved, saying he was “so honoured and so grateful,” adding that the prize would be a “great push” towards peace.

“We’re on the verge of reaching that end of this war, and this (the award) is going to be very important,” he added.

Asked why Londono was left out, committee leader Kaci Kullmann Five said Santos had been central to the process.

“President Santos has been taking the very first and historic initiative. There have been other tries, but this time he went all-in as leader of the government with a strong will to reach a result. That’s why we have put the emphasis on president.”

She declined to elaborate on Londono’s role. Londono via Twitter congratulated Santos, and thanked countries including Cuba and Venezuela for supporting the process.

“The only prize to which we aspire is that of peace with social justice for a Colombia without paramilitarism, without retaliation nor lies,” he wrote on his personal Twitter account after the award went only to Santos.

Santos is the first Latin American to receive the peace prize since indigenous rights campaigner Rigoberta Menchu of Guatemala won in 1992, and is the second Colombian laureate after writer Gabriel Garcia Marquez, who won the literature prize in 1982.

The scion of one of Colombia’s most prosperous families, Santos was not thought likely to spearhead a peace process with FARC, or Revolutionary Armed Forces of Colombia.

But though he had served as defence minister under hardline ex-president Alvaro Uribe, when the FARC were weakened by a U.S.-backed offensive, Santos has used his two terms in office to open negotiations with rebel leaders in four years of talks.

The peace talks made bitter enemies of Santos and Uribe, who accused his former protege of betraying FARC victims. Uribe founded a new right-wing political party, won a Senate seat and led the “No” camp in the referendum.

“I congratulate President Santos for the Nobel and hope it helps move towards changes to accord which is so damaging to democracy.”

The news may anger those Colombians who see Santos’ bid for peace with the FARC as selling out the nation as he negotiated terms that they see as an embarrassment.

But the fact that his rebel foe did not receive the prize alongside him may be a relief to Santos, given political tensions following the referendum. It may also give Santos a moral boost in talks with Uribe.

“This gives me hope that the prize will bring peace with the FARC, though it cannot come above the will of the people,” said Adriana Perez, a 26-year old teacher in Bogota.

The FARC on Friday agreed to listen to proposals for adjustments to the accord.

Some Nobel watchers had taken Colombia off their lists of favorites after Santos’ referendum defeat.

“The peace accord was indeed a major achievement and, although the referendum was a setback, hopefully this award will help peace builders maintain the momentum needed to keep the process moving forward,” Stockholm International Peace Research Institute Director Dan Smith said in a statement.

The United Nations human rights office, which does not usually comment on Nobel Peace Prizes, said the award was a recognition of the importance of the conflict in Colombia.

QCOSTARICA - During the celebration of the Bicentennial of...
Lighter Side