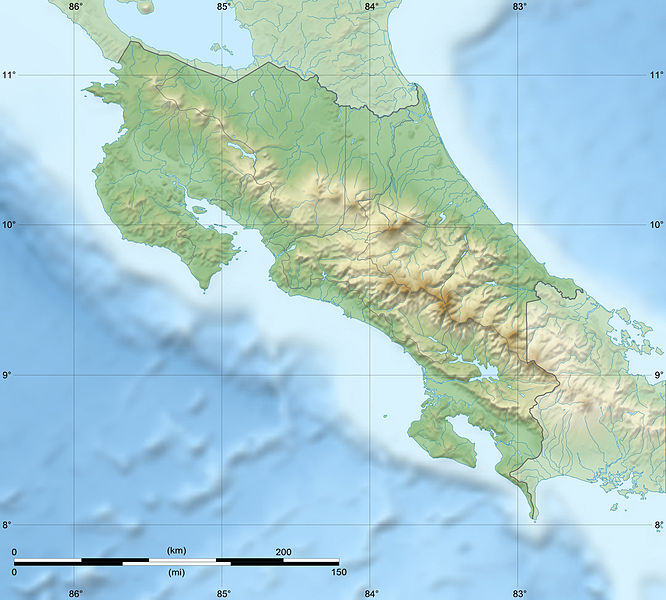 Scientists using GPS to study changes in the Earth’s shape accurately forecast the size and location of the magnitude 7.6 Nicoya earthquake that occurred in September last year in Costa Rica. 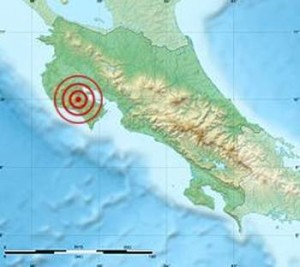 The 2012 Costa Rica earthquake occurred at 08:42 local time (14:42 UTC) on September 5, 2012. The epicenter of the earthquake was in the Nicoya Peninsula, 11 kilometers east-southeast of Nicoya. A tsunami warning was issued shortly afterwards, but later cancelled. Two people are known to have died, one from a heart attack and another, a construction worker, crushed by a collapsing wall.

The Nicoya Peninsula in Costa Rica is one of the few places where land sits atop the portion of a subduction zone where the Earth’s greatest earthquakes take place. Costa Rica’s location therefore makes it the perfect spot for learning how large earthquakes rupture. Because earthquakes greater than about magnitude 7.5 have occurred in this region roughly every 50 years, with the previous event striking in 1950, scientists have been preparing for this earthquake through a number of geophysical studies. The most recent study used GPS to map out the area along the fault storing energy for release in a large earthquake.

“This is the first place where we’ve been able to map out the likely extent of an earthquake rupture along the subduction megathrust beforehand,” said Andrew Newman, an associate professor in the School of Earth and Atmospheric Sciences at the Georgia Institute of Technology.

The study was published online Dec. 22, 2013, in the journal Nature Geoscience. The research was supported by the National Science Foundation and was a collaboration of researchers from Georgia Tech, the Costa Rica Volcanological and Seismological Observatory (OVSICORI) at Universidad Nacional, University California, Santa Cruz, and the University of South Florida.

Subduction zones are locations where one tectonic plate is forced under another one. The collision of tectonic plates during this process can unleash devastating earthquakes, and sometimes devastating tsunamis. The magnitude 9.0 earthquake off the coast of Japan in 2011 was due to just such a subduction zone earthquake. The Cascadia subduction zone in the Pacific Northwest is capable of unleashing a similarly sized quake. Damage from the Nicoya earthquake was not as bad as might be expected from a magnitude 7.6 quake.

“Fortunately there was very little damage considering the earthquake’s size,” said Marino Protti of OVSICORI and the study’s lead author. “The historical pattern of earthquakes not only allowed us to get our instruments ready, it also allowed Costa Ricans to upgrade their buildings to be earthquake safe.” 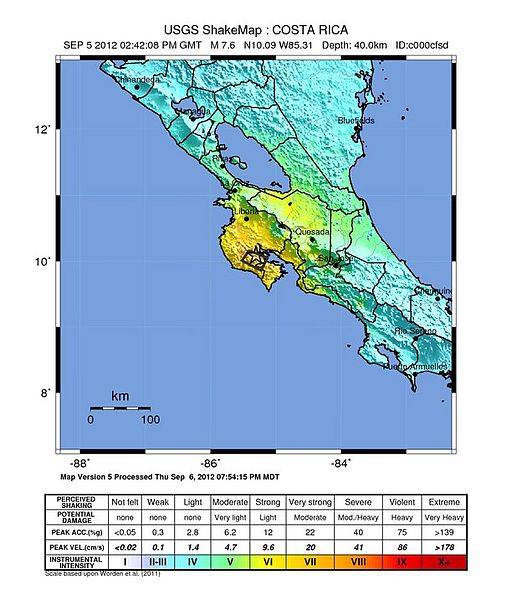 Plate tectonics are the driving force for subduction zones. As tectonic plates converge, strain temporarily accumulates across the plate boundary when portions of the interface between these tectonic plates, called a megathrust, become locked together. The strain can accumulate to dangerous levels before eventually being released as a massive earthquake.

“The Nicoya Peninsula is an ideal natural lab for studying these events, because the coastline geometry uniquely allows us to get our equipment close to the zone of active strain accumulation,” said Susan Schwartz, professor of earth sciences at the University of California, Santa Cruz, and a co-author of the study.

Through a series of studies starting in the early 1990s using land-based tools, the researchers mapped regions where tectonic plates were completely locked along the subduction interface. Detailed geophysical observations of the region allowed the researchers to create an image of where the faults had locked.

The researchers published a study a few months before the earthquake, describing the particular locked patch with the clearest potential for the next large earthquake in the region. The team projected the total amount of energy that could have developed across that region and forecasted that if the locking remained similar since the last major earthquake in 1950, then there is presently enough energy for an earthquake on the order of magnitude 7.8 there.

Because of limits in technology and scientific understanding about processes controlling fault locking and release, scientists cannot say much about precisely where or when earthquakes will occur. However, earthquakes in Nicoya have occurred about every 50 years, so seismologists had been anticipating another one around 2000, give or take 20 years, Newman said. The earthquake occurred in September of 2012 as a magnitude 7.6 quake.

“It occurred right in the area we determined to be locked and it had almost the size we expected,” Newman said.

The researchers hope to apply what they’ve learned in Costa Rica to other environments. Virtually every damaging subduction zone earthquake occurs far offshore.

“Nicoya is the only place on Earth where we’ve actually been able to get a very accurate image of the locked patch because it occurs directly under land,” Newman said. “If we really want to understand the seismic potential for most of the world, we have to go offshore.”

Scientists have been able to reasonably map portions of these locked areas offshore using data on land, but the resolution is poor, particularly in the regions that are most responsible for generating tsunamis, Newman said. He hopes that his group’s work in Nicoya will be a driver for geodetic studies on the seafloor to observe such Earth deformation. These seafloor geodetic studies are rare and expensive today.

“If we want to understand the potential for large earthquakes, then we really need to start doing more seafloor observations,” Newman said. “It’s a growing push in our community and this study highlights the type of results that one might be able to obtain for most other dangerous environments, including offshore the Pacific Northwest.”

With notes from Phys.org, Wikipedia

- Advertisement -
Paying the bills
Previous articleOP-ED: Can There be Anything More……
Next articleCosta Rica Misses Another Deadline To Lift Ban on In Vitro Fertilization | Tico Times