Several Groups Protesting Against The Government and Obama Visit 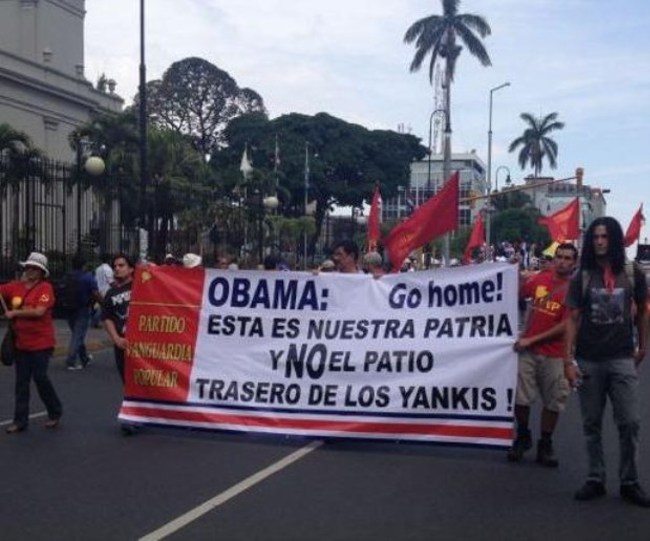 Several groups seized May 1, Labour Day, not only to protest against the Chinchilla administration, but also against the U.S. President Barack Obama visit scheduled for Friday and Saturday.

The group called the Nuevo Partido Socialista (NPS) – New Socialist Party, led by Victor Artavia, is calling unity of the different parties to sustain a fight against the government.

The group is also calling for a demonstration on Friday, May 3, the day Obama is to arrive in Costa Rica. The group will gather in the Parque Central, downtown San José, beginning at 3:30pm.

The NPS has the support of the Vanguardia Popular, who today were on the streets of San José with parade banners with the message, “Obama: Go Home! This is our country and not a Yankee backyard!”

Getting the message heard included some 40 motorcyclists and other vehicles with horns and sound systems blaring.

Other messages by the various groups included messages of discontent against the Chinchilla administration.

Q TRAVEL - Europe opened the doors to tourism. While worldwide vaccination against covid-19 advances above the levels of each country, the restrictions are...
Rico's Digest

QCOSTARICA - The prestige of the company of some of the richest men in Costa Rica hangs by a thread. For many, the MECO...
Business

QCOSTARICA - The Daniel Ortega government sent its ambassador to Costa Rica, Duilio Hernández, as its representative to the summit of Central American presidents...
Infrastructure