June is only a few months away, when Costa Rica’s national soccer team head for Brazil to take part, for the second time, in the FIFA World Cup. 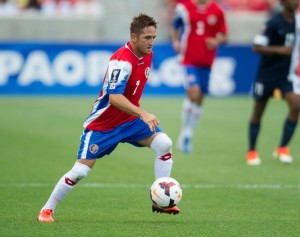 La Selección or Sele as it is referred to by Ticos, have to make the most of their tactical skills and defensive strength if they want to counter their World Cup rivals’ attacking power, coach Jorge Luis Pinto told Reuters.

“We will play against three strong teams, with a lot of experience in finals. I know they are very good teams, but these kinds of matches inspire us,” Colombian Pinto said in an interview.

“Playing against these kinds of teams will make us give our best on the pitch,” added Pinto, who spoke to Reuters before a World Cup warm-up against Chile in the northern city of Coquimbo.

All three group rivals have great strikers, something any coach would fear but 61-year old Pinto believes their characteristics can be a blessing for his team.

“We’ll have to stop them, we’ve got a balanced and vigorous defense, very efficient. I can say that Costa Rica’s great skill is their defense, but not just our four or five defenders, the whole team,” Pinto said.

Costa Rica will have to cope with forwards such as England’s Wayne Rooney, Uruguayans Luis Suarez and Edinson Cavani and Italian Mario Balotelli.

“We need to contain them. That will be our greatest strength, tactical order, be efficient when we try to stop these players. I think that if we can achieve that, we can have an advantage against these great teams.”

Costa Rica have a negative record against Uruguay (two draws and six defeats) and Italy (one defeat). The match on June 24 at Belo Horizonte will be their first against England.

“Italy are very complicated opponents. You know all they can do at a World Cup, like England. Uruguay have a great generation, maybe they need some renovation, some young blood, but they’re a very complicated team.”

Uruguay, who beat Costa Rica in their qualifying playoff for the 2010 finals, have made few changes during last four years to the side that reached the semi-finals in South Africa.

Costa Rica will play their first match against Uruguay on June 14 in Fortaleza and meet Italy next on June 20 in Recife.

“I’ve never seen a team playing worse than Italy at the beginning of 1982 finals, but then they won the World Cup,” Pinto said.

“I really admire Italy, they’re a very compact, efficient team with an amazing defensive order. They don’t take the game to their opponents so much but they get good results.

“England are the fastest (of the three) teams, explosive but attractive. I would say that today Uruguay are more attractive than England,” Pinto added.

Costa Rica were beaten 4-0 on Wednesday as they and Chile both began their preparations for the finals with under-strength teams. Chile played their usual pressure game, mostly keeping Costa Rica pinned back in defense.

Costa Rica will play South Korea at home on Saturday and meet Paraguay in another warm-up on March 5. Pinto wants to play two more friendlies in June, one possibly against Cristiano Ronaldo’s Portugal.

Today, Monday, June 21, we are back to the two plates that cannot circulate, in today's case plates ending in 1 & 2 CANNOT...
Reports

Q24N - You may not know John McAfee, of his eccentrics, but you are sure to have the name and may even have your...
Corrupion