Telecable to bring Wi-Fi to 170 sites in Costa Rica

Costa Rican operator Telecable confirmed that it will be bringing Wi-Fi connectivity to 170 sites throughout the country under the government’s  “Espacios Públicos Conectados” (Connected Public Spaces) program. 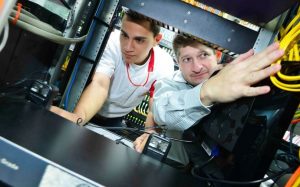 The operator will install public sites in the areas of Guanacaste, Puntarenas, Heredia, San Jose and the South Zone, offering free internet access at speeds of 100, 200 and 300 Mbps via fibre-optic infrastructure.

The rollout will be carried out in 3 stages lasting around 2 years, with Belen (Heredia) set to be the first connected in the first half of January 2019.

Telecable is one of three bidders awarded contracts worth a total of US$69 million dollars alongside Coopeguanacaste and a consortium made up of state operator ICE, Racsa and PC Central.

The digital divide initiative will use resources from the National Telecommunications Fund (Fonatel) to bring Wi-Fi to 515 sites including parks, libraries, train stations, civic centres and public universities across the country.

Costa Rica's Telecable has gotten into the spirit of Christmas giving...
Read more

QCOSTARICA - The contagion rate of covid-19 in Costa Rica fell for the second consecutive week and registers the lowest values ​​of the last...
Nicaragua

TODAY NICARAGUA – A study based on data from the WHO and the University of Oxford placed Nicaragua as one of the “10 safest...
Colombia

QCOLOMBIA – For the past two weeks, mass protests that started on April 28, have rocked Colombia, leaving at least 42 people dead and hundreds...
Vaccine

QCOSTARICA - Applying 150,000 doses per week of the covid-19 vaccine and establishing stricter vehicle restrictions temporarily, are the two main proposals of the...
Health

QCOSTARICA - The National Commission for Risk Prevention and Emergency Attention (CNE) has increased alerts for another 7 cantons, bringing the total to 72...
Health

QCOSTARICA - The last seven days (May to May 11) have been bitterly deadly for the country, with 146 people dying from covid-19. According to...
Economy

QCOSTARICA - The Global Talent Competitiveness Index (IGCT) 2020 revealed that out of 132 countries, Costa Rica ranks 37th in human talent with a...