Thank You For The Trees

Dozens of children from the Osa Peninsula in Costa Rica recently gave Mother Earth a nice present in advance of August 15th: 500 fruit trees planted in strategic areas. According to Yency Arroyo Murillo of Diario Extra, business leaders and public officials from the Municipality of Osa helped in coordinating this noble cause. 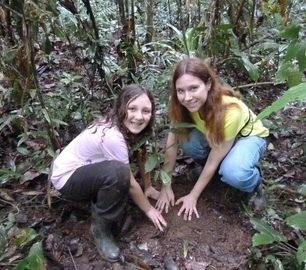 The trees have been planted alongside some of the major roads around town. Most of the species planted are fruit trees that yield delicious treasures such as sour sop, lemon, mango, and papaya. The idea is to provide shade and oxygen to human residents and nourishment to the plentiful wildlife that calls Osa home.

The planting activity above is part of an ongoing reforestation effort that seeks to revert some of the harm caused to Costa Rica over more than three decades of irresponsible farming and logging. Before the middle of the 20th century, the forest coverage in Costa Rica was almost 75 percent. By 1983, that coverage was drastically reduced and the alarm was sounded. Since then, reforestation and reclamation of forest land has managed to increase forest coverage to 52.3 percent, with a goal of reaching 60 percent in the next few years.

The Costa Rica Star recently explained the goals of two major programs in Costa Rica that are helping advance the national carbon neutrality initiative by means of reforestation:

“MINAE and FONAFIFO have managed to reclaim a good portion of the forest land lost thanks to programs such as Payment for Environmental Services Program (PSE in Spanish) and the Strategy to Reduce Carbon Emissions Caused by Deforestation and Forest Degradation (REDD+ in Spanish). The PSE program has been particularly effective in this regard since it encourages participation of land owners.”

By getting children involved in reforestation, Costa Rica is effectively planting a seed in her young people. Accomplishing environmental protection goals is much easier when people are aware of the intrinsic benefits and actively contribute to protecting the ecosystems they live in.

Q TRAVEL - Travelers from the European Union or third countries, including Costa Rica, who have fully been vaccinated, will now be able to...
Redaqted

Q REPORTS (DW) In Peru, the left-wing village school teacher Pedro Castillo has in all probability been elected the new president. The fact that...
Latin America