The permit that are being processed is for the sale of levonorgestrel, which is approved, would only be available by prescription 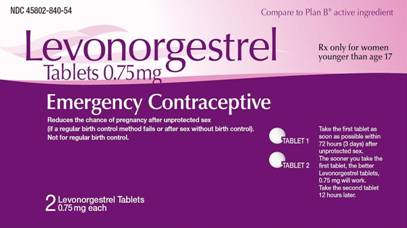 The morning after pill or as emergency contraceptive could be on sale in Costa Rica and available to the Caja Costarricense de Seguro Social (CCSS) in the coming days.

This if the pharmaceutical company that processes the permits manages to comply with all the requirements established by the Ministry of Health for the granting of the “Registro Sanitario”.

The press office of the Ministry of Health confirmed that for some time “they received the application for registration for the pill called “Levonorgestrel“, but a hold was placed on the process, giving the company 10 business days to respond to Health observations and conditions, such as its sale be permitted only by prescription.

More: Ticas Have Access Similar To “Morning After Pill”

The company responds positively, the Ministry of Health will continue with the process and analysis to determine if a permit will be issued, explained Ileana Herrera, head of registration. The official added that the process for this pill is the same as that applied with any other medications; that is, it does not require an additional “protocol” or “regulation” issued by that entity.

Sold only by prescription. In the event a Health permit is granted, Levonorgestrel could be prescribed by doctors in private practice or the CCSS

Day after pill can be bought openly, says the Ministry of Health

Daniel Salas Peraza, Minister of Health, said that regarding the sale...
Read more

The Internet can be a scary place for people...
National