The Paper War of Daniel Ortega: Nicaragua, on the verge of running out of its main newspapers 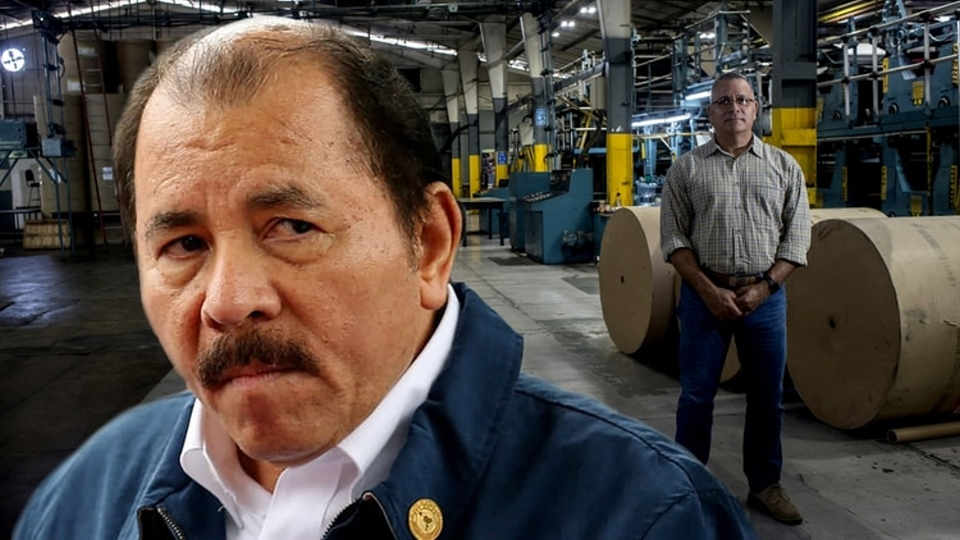 At six in the afternoon, the La Prensa press is a huge sleeping monster. The Goss Urbanite, with almost 50 years of life, the printing press that takes up an entire plant remains in quiet. In the background, a score of paper rolls are stacked on top of each other. They are the last ones left.

La Prensa, at 93 years, is the oldest newspaper in Nicaragua and could be on its last months. At least in its printed version. Its agony is not due to the bloody global battle between digital and print, not even an economic crisis that hits all companies.

Its executioner has a name: Daniel Ortega. And his method of execution is holding back the paper and the ink that the press needs to stay alive.

In the same situation are El Nuevo Diario and its Hoy.

Since last September the government of Daniel Ortega decided to hold on to the paper, ink and other supplies. “They are orders from above,” customs officials say when asked for an explanation.

“What they (Ortega regime) want is that people do not have access to information, they have a ton of media that paint a reality as they want it,” explains journalist Eduardo Enríquez, who for 20 years has been the editor of La Prensa. “We had to reduce the size of the editions, from 36 pages we went to 24 and now to 12 to extend the life of the paper with its inventory.”

We are out of newsprint. The print newspapers have survived until now resorting to other types of paper that they had in their presses for other publications. A more expensive paper. In this way, Nicaraguans receive thing newspapers that for now appear on semi-bond paper. Then they will use the stocks of glossy paper that will mark the terminal stage of the medium. Then death will come. This process could last about two months, depending on the cunning that each media uses to survive.

Douglas Carcache, deputy director of El Nuevo Diario, says they have tried to buy from other companies that import paper for other purposes and all refused because they say they are warned by the government that they can not sell the paper to El Nuevo Diario and La Prensa.

Carcache recognizes that paper retention has been a blow to his daily. “We suffered a double blow, on the one hand, the retention of paper and on the other the economic crisis that affects all companies, there are companies that have closed or have reduced their advertising and marketing budgets.”

El Nuevo Diario drastically reduced its pages and print runs and closed the Q’Hubo tabloid. “We decided to prioritize the traditional newspaper because at this time people have an interest in what is happening and traditional media are the benchmark for credibility,” says Carcache.

From the wave of protests that began in April last year and the violent response of the Ortega regime, the print runs ran out quickly and the reading on the web doubled. “It’s funny,” Carcache reflects, “we are in the best time to do journalism but we are in the worst time for freedom of expression.”

During the Somoza dictatorship, La Prensa suffered closures, harassment and at the end of the war, it was even burned and bombarded by Air Force planes. In January 1978, its director Pedro Joaquín Chamorro was killed by thugs on his way to work.

Taking power, the Sandinistas also subjected La Prensa to censures and closures in the 1980s. However, it was the president of La Prensa’s Board of Directors, Violeta Barrios de Chamorro, widow of the Pedro Joaquín, who defeated Daniel Ortega in the 1990 elections.

That defeat marked the end of the Sandinista revolution.

“In no dictatorship had we retained paper as now,” says Jaime Chamorro, brother of Pedro Joaquín Chamorro, and current director of La Prensa. “In the 80s, when we ran out of paper, the same government sold us Russian paper, maybe because they were more interested in the dollars,” he surmises.

Chamorro says the Ortega recipe is almost the same applied by Nicolas Maduro to the independent press in Venezuela. Last December the printed version of the El Nacional, one of the few printed media circulating in Venezuela, stopped publishing as a consequence of the economic sanctions and difficulties that the government placed on paper imports.

On January 18, La Prensa gave a desperate cry by publishing its runs blank front page with only one line at the bottom: “Imagine living without information?” In the editorial of that day, he said: “With the seizure of 92 tons of paper, ink, plates, rubber, developer and spare parts for the press, the regime endangered the circulation of the printed version of the Diario. The intention (of the government) is clear, stop the circulation of independent print media in Nicaragua”. 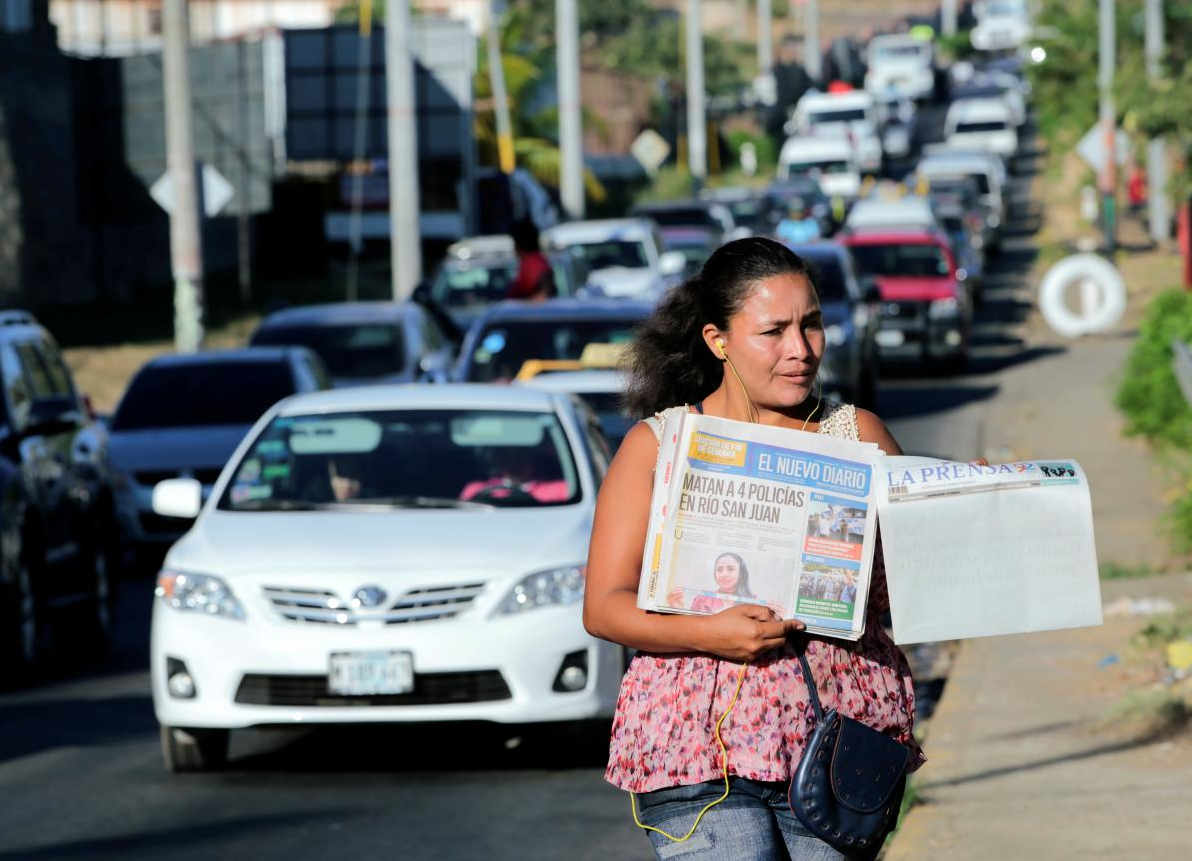 “We are going to fight until we can and with all the legal resources we have and we will continue to bring the news to our readers, we are analyzing the adjustments that can be made to last as long as possible,” says Chamorro.

Chamorro explains that on two occasions they have resorted to the laws. The customs court have ruled in favor of the release of the paper, but customs refuse to release it “because it is an order of the Presidency.”

The Internet is the refuge.

Journalist Eduardo Enríquez says that La Prensa has been preparing for a couple of years for the digital platform to be preponderant, but recognizes the importance of reading in printed form in Nicaragua.

“People do read the print and look for it (…) it will mean unemployment for many people who are not directly related to the generation of new,” said Enríquez.

This also poses a dilemma to printed press in Nicaragua: How to survive digitally in a country where only two out of ten people have access to the internet, the lowest rate in Central America?

Both La Prensa and El Nuevo Diario recently started charging for reading on the web as a way to survive these bad times. However, Enriquez says that with the number of subscribers that the newspaper has so far is insufficient to maintain itself, if the printed disappears.

There is hope. Jaime Chamorro hopes that Daniel Ortega will fulfill the commitment to release the kidnapped paper as he promised in the negotiations with the opposition. “I hope it happens,” he says hopefully.

He assures that Ortega will not see La Prensa die. “It will be one hundred years old,” he says confidently.

In the print room, Álvaro Rivera, head of the printing press of La Prensa, with 32 years of managing the mechanical monster, explained: “We are working at 20 percent capacity. The press printed for about six continuous hours, and the rest of the time was for maintenance.”

Now, he says, the printing process is only for two hours and have let go of the maintenance staff. “We do it ourselves”, he said.

At nine o’clock at night, the metallic monster will stretch out with rhythmic rattles. The smell of fresh ink will return, and even for a while, as it has for half a century, it will spew up tomorrow’s newspaper.

Costa Rica lies in Central America with a shoreline...
Travel