Tipico Food and the ‘Soda’ 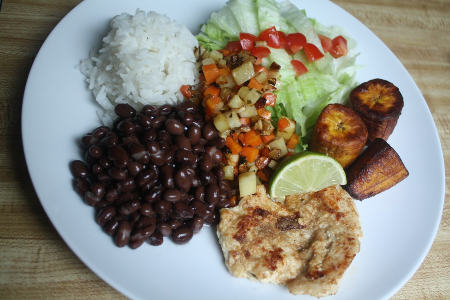 A ‘soda’ in Costa Rica is a small restaurant that offers ‘tipico’ (typical) Costa Rican food at modest prices. More often than not there will be nothing on the menu over $4.

If you are hungry and short of cash, you can get something for under $2. Let’s take a look at a ‘tipico’ menu from ‘Soda Y Taqueria Erika’ which is run by a friend of mine.

Starting us off are… ta da! Hamburgesas! The basic burger and fries, a bit less than $2. The ‘special’ burger and fries will run you a little under $3. The special probably includes cheese and possibly bacon… I haven’t tried it yet. Next are hot dogs and fries, regular and special, for the same prices. Sadly, I can not report what the difference is, though cheese is once again a likely addition. You can order just the fries, regular or large, for 1 to 2 dollars. Gallo pinto, the national dish of rice and beans, runs under $2. You can also get tacos and patacones (fried plantain cakes).

But before you EVER order a taco in Costa Rica (Taco Bell excepted) be aware that YOUR idea of a taco will probably not coincide with the Costa Rican version. I recall my dismay when I ordered two tacos from a place that called itself ‘Tacos Mexicanos.’ What I got were two uncooked corn tortillas with some chicken at the bottom, topped off with cabbage and thousand island dressing. ‘Ick’ would about describe my reaction. But maybe you love cabbage and thousand island dressing. Just be aware.

Some more entrees include nachos, burritos, chalupas, fried chicken, fajitas, and empanadas. It’s kind of a crap shoot here as to whether what you order will resemble what you think you are ordering. The fried chicken will be what you expect, I have to admit, and the fajitas are usually pretty decent and recognizable as such to gringos, though not as fancy as the Mexican or US versions.

Turning to the other side of the menu, we have some of the more substantial meals. Casados are meals with a meat or fish main course, salad and maybe fried plantain or yucca. They are called ‘casados’ because this is typically what’s served at home when you are ‘casado’ (married). You can choose ‘bistec’ (beef steak, bring you best teeth), pork chop (chuleta), chicken or fish. All run under $4. Then there are the rice dishes (Arroz). You can get it with chicken, pork, shrimp, beef, or ‘cantones’ (Chinese). All run under $4.

Rounding out the menu are desserts and drinks. Among the drinks, the cheapest and my favorite are the ‘refrescos naturales.’ These are fruit drinks, basically fruit juice, often as not something that will seem exotic to a North American or European. We’ll cover local fruit in a separate blog. You also have soft drinks and ‘batidos’ which are something like ‘smoothies’ made with local fruit and sometimes milk. Most of the drinks run around $1. Desserts include ice cream, fruit salad and banana splits. They run from 2 to 3 dollars.

The locals love this food, visitors give it mixed reviews. One irritating habit the local cooks have is the overuse of cilantro. I can’t really tolerate the stuff, and they seem to think it belongs in everything except (maybe) dessert.

There are some other ‘tipico’ options that you will not find at every soda, but are pretty common. One is ‘pollo a la lena,’ which is chicken roasted over coffee wood. It is delicious and can be bought by itself or in combination with rice, beans, salad and whatnot. There are also the ‘Chino’ places. Full menu Chinese restaurants also exist, but these places are more limited in scope, menu and waiting time. Some will have pollo a la lena, but most of the food is either stir fried or deep fried. Fried chicken, taco chino (like an egg roll but just cabbage inside), chicharron (deep fried pork), French fries, chop suey, rice dishes and the like are available to eat onsite or to go, usually from a window in front. The food tends to be heavy on the grease, so take an extra lipitor.
There are plenty of other eating options, but we’ll save that for another blog. Bon apetit!

The author lives in the Monte Cielo Gated Community in Puntarenas, in the hills above Pacific Ocean near Jaco.

About the author: Phil Taylor, retired building contractor from Chicago Illinois. Phil lives with his wife of 35 years, two mongrel dogs they adopted locally and a parrot named Socrates. Phil enjoys working on his tree house and writing about his adopted country.

- Advertisement -
Paying the bills
Previous articleAnother Environmentalist Murdered in Limón
Next articleBLOG: One Misconception Made By Expat Canadians and Americans About Costa Rica