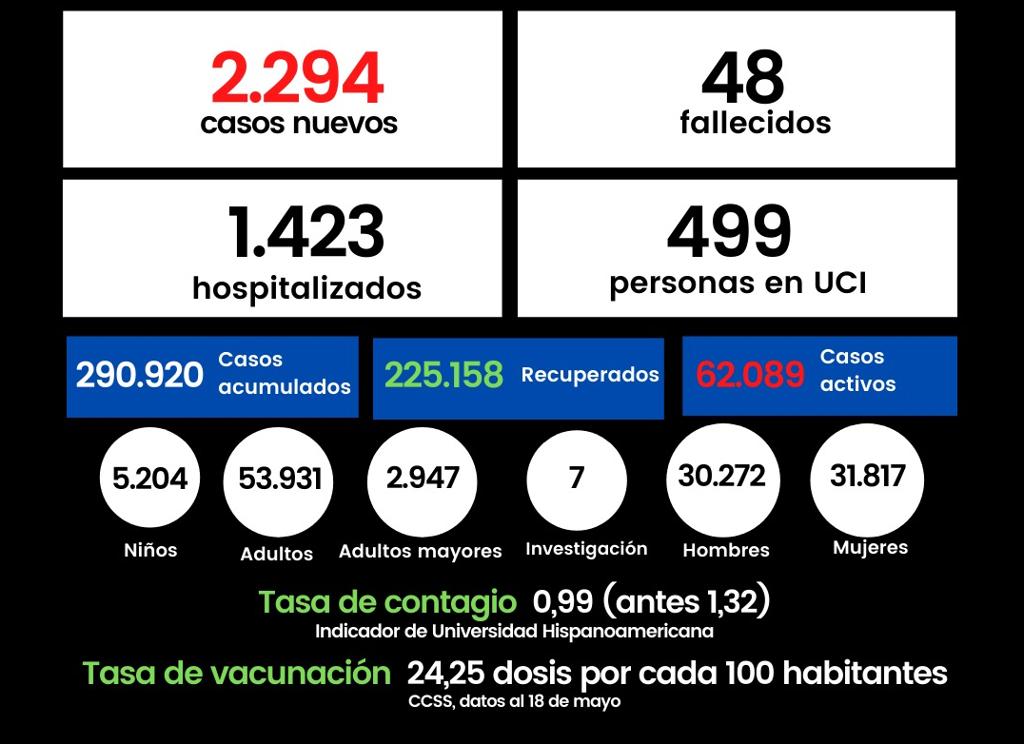 QCOSTARICA – Reducing the number of infections, freeing up hospital beds and establishing national and international collaborations are the objectives of the announced actions by President Carlos Alvarado during Tuesday’s press conference.

The other measures announced Tuesday are new vehicular restrictions starting Wednesday, May 9, to May 30; the beginning of the vaccination of group 4, starting with solid waste collectors, public and private education personnel, personnel from comprehensive care centers (CAI) and officials from AyA, PANI and others; work centers may make use of antigen tests on their staff; and, Non-COVID patients will be transferred to shelters, clinics, health areas and public and private hospitals allowing more than 400 beds for emergency care.

Alexander Solis, president of the Comisión Nacional de Emergencias (CNE) announced that the entire country is facing an orange alert due to high hospital occupancy and epidemiological records in recent weeks.

The alert is one step below red that, according to Solis, would in effect shut down the country completely, perhaps is more than the lockdown applied in many other countries. As Solis explained last week, a red alert is used to manage a disaster.

The Ministry of Health issued new instructions regarding COVID-19 antigen testing, giving work centers the possibility to carry out this type of sampling on their personnel. In addition, it is guaranteed that anyone can perform the antigen test in private laboratories, as long as they do not present symptoms, since symptomatic patients must opt ​​for the RT-PCR test.

The CNE set up three containment centers for the care of COVID-19 patients who do not have a suitable place at home to quarantine. The three centers have a total capacity of 70 people and more spaces could be provided according to the country’s demand or need.

Acceleration plan in vaccination. As announced by President Alvarado days ago, the country is working on actions that will allow us to access more doses of vaccine against COVID-19, as well as strengthen the application in all regions of the country.

This plan includes negotiations with the Chinese government to acquire the Sinopharm vaccine, which is already on the approved list of the World Health Organization (WHO).

Similarly, the country in talks with the United States to access new lots of vaccines.

In addition, President Alvarado reconfirmed that the private sector is authorized to start the importation and use of vaccines.

“This authorization is available and the Government will seek to see it materialize,” said Alvarado.

The most alarming of Tuesday’s epidemiological report is the number of deaths in the 24 hours, 48. A number that had never been seen in the country. That translates into a covid-19 patient dying, on average, every 30 minutes.

Worrisome is the continued pressure on medical services. On Tuesday, it was reported that 1,423 people were in hospital being treated for covid-19, of which 499 are in an intensive care unit, the lowest in the last 4 days.

The unstoppable increase in COVID-19 patients throughout the country, forced the authorities to further limit traffic on the roads, in order to stop the spread of the virus.

“It is a complex situation that we are experiencing at the moment. We will be able to overcome this wave, which hits us so hard, with the support of the entire population,” Alvarado said in a call for solidarity, especially with families who have lost a loved one in this emergency.

Effective of this Wednesday, May 19 and until May 30, the vehicular restrictions it will be applied for odd and even plates, on alternate days, from 5:00 am at 9:00 pm.

The restrictions apply countrywide and to all vehicles, save the well known exemptions.

A new exception is only for May 19, 20, and 21 will be the transfer to public and private day educational centers.

The official list of exceptions are available at presidencia.go.cr/alertas

The establishments may continue to operate on a regular basis between 5:00 a.m. and 9:00 p.m. The conditions in the use of public transport, beaches and capacity remain unchanged.

- Advertisement -
Paying the bills
Previous articleWill Costa Rica be on US list of vaccine donation?
Next articleNew vehicular restrictions in effect Wednesday, May 19