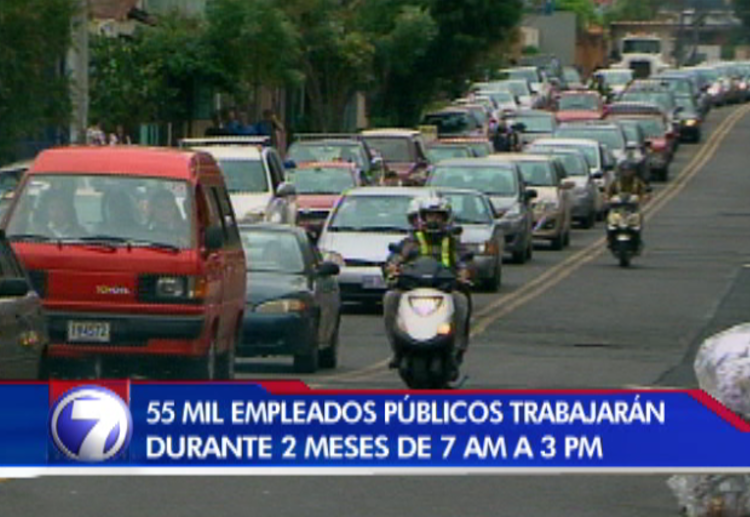 Today,  some 55.000 public sector employees started their day with their new hours, showing up at work at 7am instead of 8am.  Local television news Telenoticias gave us this morning a sneak preview of what will be for sometime, rather than diminishing, traffic congestion in San José started one earlier.

The measure of starting and quitting one hour earlier (starting today civil servants work from 7 to 3 instead of 8 to 4)  was put in place by the current administration to ease traffic congestion for the next two months following the closure of the Circunvalación, between Hatillo 8 and Pavas, during the next two months.

But will the plan really work?

The news footage showed us the streets in areas surrounding the Circunvalación, like La Sabana’s Calle Morenos and Hatillo 8, were just as congested as yesterday, just earlier.

The collapse of the a section of the Circunvalación has, without a doubt, affected everyone in the country, including visitors who have to leave earlier for the airport to not miss their return home flight due to the traffic chaos.

QCOSTARICA - One of the old Apolo trains derailed this Wednesday...
Read more

General Cañas tolls will remain despite the congestion

RICO's TICO BULL - Despite the tremendous congestion, in both directions,...
Read more

QCOSTARICA - A new batch with 124,020 doses of the covid-19 vaccine landed on national soil this Tuesday night, as part of the weekly...
Health

QCOSTARICA - After breaking all records last week, the number of new daily cases of Covid-19 in Costa Rica continues on the decline, according...
National

QCOSTARICA - A PhysEd teacher managed to get the Judiciary to agree to pay him just over ¢1.2 million colones (US$2,000) for taking him...
Quepos

QCOSTARICA - With the objective of boosting connectivity, regional tourism and the economic reactivation of the area, work started this Wednesday on the improvements...
Business

QCOSTARICA - The Cooperativa Autogestionaria de Servicios Aeroindustriales (COOPESA), the Costa Rican company that started as a manufacturer of bus bodies until 1993, and...
Health

QCOSTARICA - After three days of nothing, not a word from the Ministry of Health, on the current covid-19 situation, Monday afternoon numbers were...
Health