The Supreme Elections Tribunal (TSE), the apolitical watchdog of elections, has asked the lawmakers for the fourth time to reform the so-called political debt to make it more transparent. TSE, investigating claims by political parties in the 2010 election found a host of scams by a number of parties. 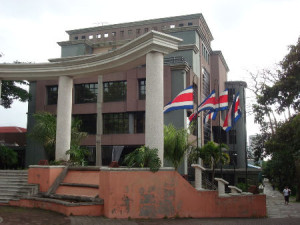 The government pays for some legitimate campaign expenses for parties that earn enough votes in national elections. This was instituted to give smaller, less well-heeled parties a more even chance at a time when election requirements are increasingly costly.

TSE Chief Magistrate Luis Antonio Sobrado would like to see the system made more equitable, austere and transparent. This is what he is asking of the Legislative Asssembly but it is likely that he is shouting in a deaf ear. When TSE caught high party officials of the major parties with their hands in the cash drawer, he received not so much as a thank you.

Instead, some deputies instead called for the accounting function to be removed from an agency which is apparently incorruptable and the government support of parties placed in a more politics friendly system. None of the parties that billed for non-existent training session and transportation offered so much as an apology to taxpayers.

One of the advances that Sobrado could boast about was, for the first time, a mechanism by which numerous Costa Ricans living abroad could vote in the national election, although overseas voters had to visit embassies and consulates in order to vote.

Q REPORTS (Council on Foreign Affairs) Democracy is being destroyed in Nicaragua. This has been the long-term project of Daniel Ortega, the country’s dictator,...
Economic Recovery

QCOSTARICA - Despite the improvement in tourist arrivals reported in May, with more than 72,000 visitors, both the Cámara Nacional de Turismo (Canatur) and...
Weather