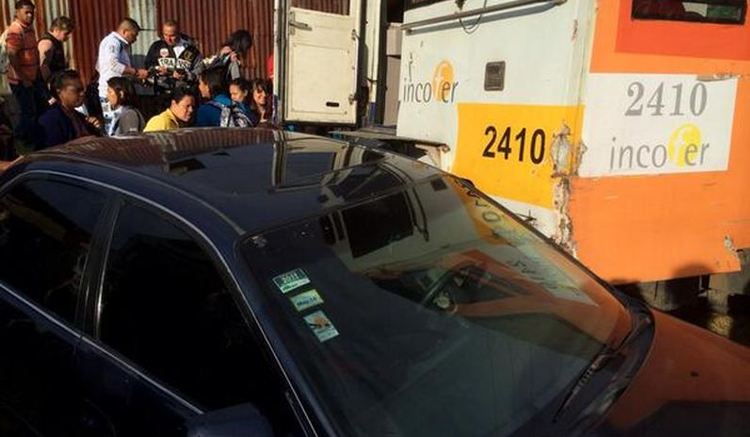 For the second day in a row the train has been involved in an early morning traffic accident. The accident this morning (Wednesday) occurred at 6:40 am, at the train crossing north of the Paseo de la Flores mall, in Heredia.

Transit official, Rafael Pizarro, explained that the accident involved a light passenger vehicle that did not respect the oncoming train. The vehicle was dragged for some 50 metres (yards) or half a block in the way we calculate distances in Costa Rica.

Germán Marín, the director of the Policía de Tránsito, added that traffic through the area was heavier than usual due to the collision.

Cesar Vargas, the driver of the passenger vehicle, explained that he was blinded by the early morning sun and due to parked cars along the road he could not see the train, nor hear the blowing of the whistle.

No injuries were reported in this accident.|

Tuesday morning, the train collided with a heavy truck in the area of San Pedro mall, sending six people to hospital for injuries. In that case, the driver of the truck also did not respect the train.

In both cases, there level crossing (train crossing barrier) and as is customary by the INCOFER (Costa Rica’s railway), the rain crossing lights are continually flashing.

QCOSTARICA - The value of Costa Rica exports increased by 23% in the first five months of the year, being the highest growth in...
Politics

Today, Saturday, June 19, only vehicles with "ODD" ending plates CAN circulate The measure is countrywide and applied between 5:00 am and 9:00 pm, save...
Cine (Movies)