"Costa Rica has experienced the misdeeds of the China Communications Construction Company (CCCC), having worked with its subsidiary CHEC on the project to widen Route 32" US Ambassador to Costa Rica 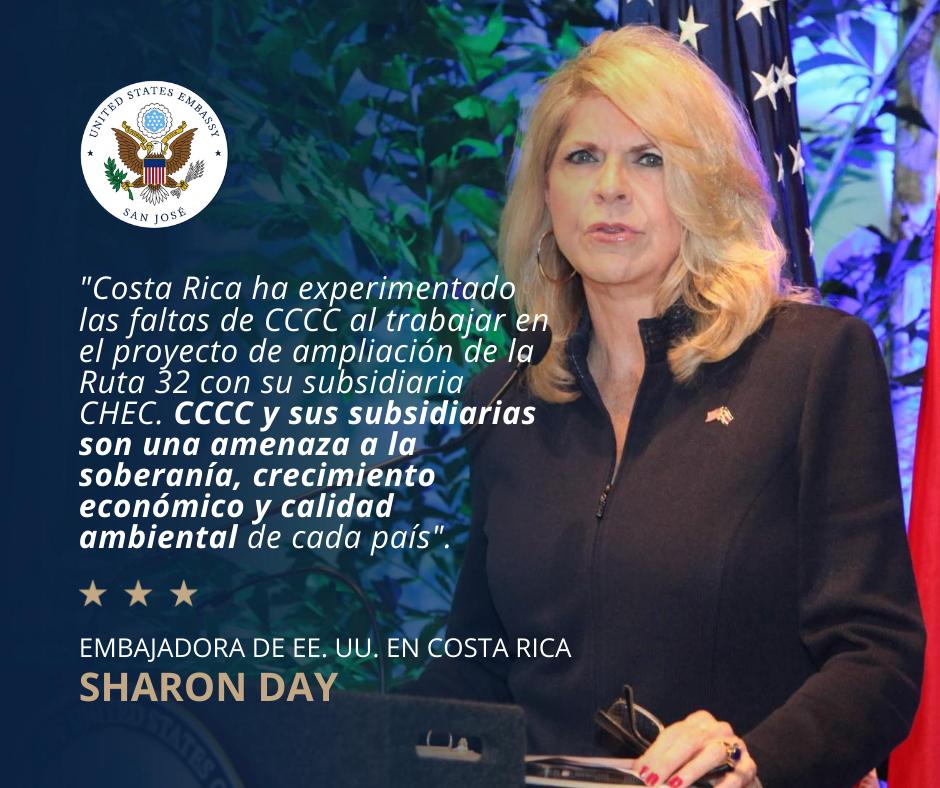 (QCOSTARICA) The dispute between the United States and China reaches the China Harbor Engineering Company (CHEC), which is in charge of the expansion work of the 107 kilometers of the Ruta 32 between Rio Frío and the center of Limón.

This morning, the United States Embassy in San José issued a statement by the U.S. Ambassador to Costa Rica, Sharon Day, and U.S. Secretary of State Mike Pompeo, who questions that the Asian giant uses its companies to seize the resources of 3,000 acres of the South China Sea.

Among the companies are the China Communications Construction Company (CCCC), the parent company of the CHEC construction company.

“Costa Rica has experienced the misdeeds of the China Communications Construction Company (CCCC), having worked with its subsidiary CHEC on the project to widen Route 32. CCCC and its subsidiaries are a threat to every country’s sovereignty, economic growth, and environmental quality,” said Ambassador Day.

“The People’s Republic of China should not be allowed to use CCCC and other state companies as weapons to impose its expansionist agenda,” warns Pompeo’s statement, released by the United States Embassy in Costa Rica.

Pompeo adds that the United States “will take action until we see that Beijing stops its coercive behavior in the South China Sea, and we will support our allies and partners to resist this destabilizing activity.”

Among the measures he highlighted are imposing visa restrictions on citizens of China “responsible or complicit in the claim, construction or large-scale militarization of disputed outposts in the South China Sea or in the use of coercion by the PRC against claimants from Southeast Asia to prevent their access to marine resources”.

The complete statement from Micahel Pompeo, U.S. Secretary of State:

The United States supports a free and open South China Sea. We respect the sovereign rights of all nations, regardless of size, and seek to preserve peace and uphold freedom of the seas in a manner consistent with international law. In July, I announced an updated policy regarding Beijing’s unlawful maritime claims in the South China Sea and emphasized that the United States was prepared to take firm action to oppose Beijing’s campaign of bullying.

Today, the Department of State will begin imposing visa restrictions on People’s Republic of China (PRC) individuals responsible for, or complicit in, either the large-scale reclamation, construction, or militarization of disputed outposts in the South China Sea, or the PRC’s use of coercion against Southeast Asian claimants to inhibit their access to offshore resources. These individuals will now be inadmissible into the United States, and their immediate family members may be subject to these visa restrictions as well. In addition, the Department of Commerce has added 24 PRC state-owned enterprises to the Entity List, including several subsidiaries of China Communications Construction Company (CCCC).

Since 2013, the PRC has used its state-owned enterprises to dredge and reclaim more than 3,000 acres on disputed features in the South China Sea, destabilizing the region, trampling on the sovereign rights of its neighbors, and causing untold environmental devastation. CCCC led the destructive dredging of the PRC’s South China Sea outposts and is also one of the leading contractors used by Beijing in its global “One Belt One Road” strategy. CCCC and its subsidiaries have engaged in corruption, predatory financing, environmental destruction, and other abuses across the world.

The PRC must not be allowed to use CCCC and other state-owned enterprises as weapons to impose an expansionist agenda. The United States will act until we see Beijing discontinue its coercive behavior in the South China Sea, and we will continue to stand with allies and partners in resisting this destabilizing activity.