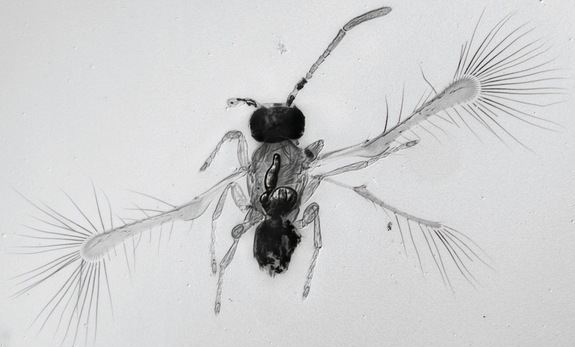 A new species from Costa Rica is attracting many researchers. This species has been dubbed as Tinkerbella nana after getting inspired from Peter Pan.

Tinkerbella nana is a newly found species of fairyfly. It is a type of chalcid wasp, and lives like a parasite on the eggs and larvae of other insects. They exude their nutrients from their prey and are also useful for farmers. They often use them to control the pests.

Mostly all fairyflies are extremely tiny. This also includes Kikiki huna, a Hawaiian species that grows to be only 0.005 inches long. It is almost the size of a drawing pen. The researchers headed by John Huber of Natural Resources Canada found out the insect eggs in leaf litter, soil and on plants in the Costa Rican province of Alajeula.

Their small size makes it difficult to find them. But, the researchers did find them and none of them were more than 250 micrometers in length.

After observing them, it was found that these insects have very fine scales, long, skinny wings, which end in hairlike fringe. This wing shape aids these small insects to reduce disturbance and drag when they fly.

One of the researchers, John Huber said, “If we have not already found them, we must surely be close to discovering the smallest insects”.