Unemployment Hits Over One Million Argentines 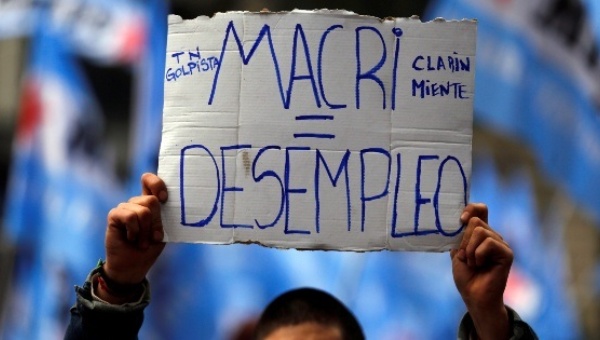 (Prensa Latina) In tone with the recession affecting today the Argentinean economy, unemployment rose to 9.3 percent in the second quarter of 2016, meaning that one million 165 thousand citizens are jobless at the end of June.

The amounts were reported by the National Institute of Statistics and Census (Indec), which admitted the manufacturing sector is one of the worst hit by retraction and particularly the small and medium enterprises.

The news portal El Destape web says by the numbers of Indec, it can be calculated that one million 688 thousand Argentineans were left unemployed from the end of September 2015 to the end of June, 2016.

The report coincides with the estimates of private consultants, including EcoLatina which calculates the loss of workplaces will rise to 12 percent by the end of this year.

After knowing the labor data, the Secretary General of the Central de Trabajadores de Argentina (tradeunion), Hugo Yasky, said on Tuesday to the CSN network that ‘when employment goes down, so do the salaries’.

‘There are some who say the Government needs two digits of unemployment so trade unions bow their heads. This is not by chance, the high unemployment rates go hand in hand with tghius government’s policies’, he warned.

Yasky, favoring that all trade unión federations summon a general strike, he believes ‘if we workers do not defend employment and demand a social policies agenda and the protection of the small Enterprise, the situation will get worse’.