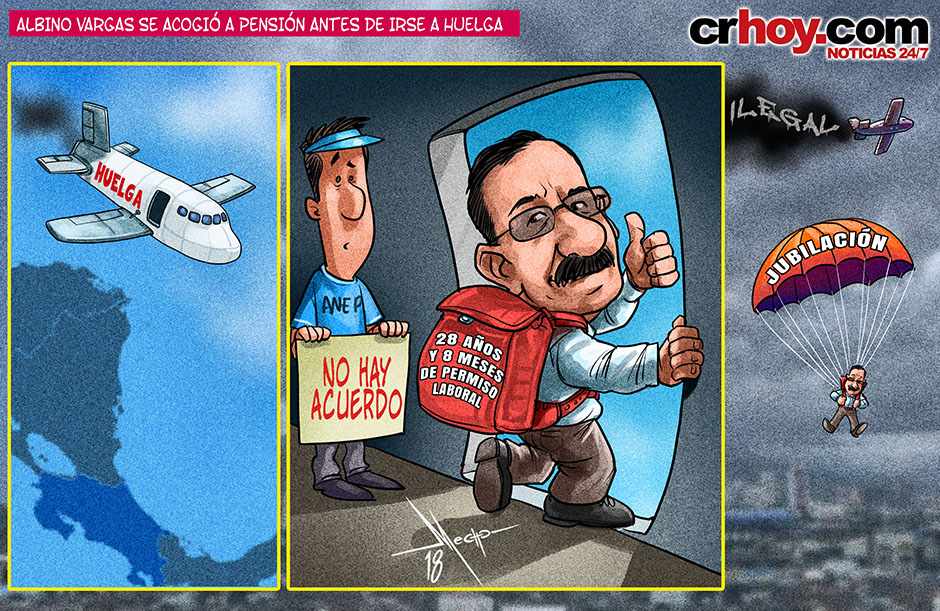 In the caricature by Crhoy.com, we see Albino Vargas, the leader of one of the most powerful public sector unions, the Asociación Nacional de Empleados Públicos (ANEP), heading for retirement now that the end of the strike is around the corner

Vargas was pretty peeved when on Monday Crhoy broke the story that he had taken his retirement from his job with the Ministerio de Justicia, a job he has been ‘on leave’ for the last 28 years and 8 months, on August 1, before the commencement of the national strike which he leads.

This is despite the fact that the information published by CRHoy consists of public information, corroborated and granted by the Costa Rican Social Security Fund (CCSS) given his status as a public official.

QCOSTARICA - Sunday night, 432 of the 1,188 covid patients in hospital are in Intensive Care Units (ICU), after suffering complications from covid-19. In the...
Health

QCOSTARICA - The National Commission for Risk Prevention and Emergency Attention (CNE) has increased alerts for another 7 cantons, bringing the total to 72...
Infrastructure

QCOSTARICA - With a mega-complex of more than 153,000 square meters (1.65 million square feet), comprised of 16 ministries would be located in eight...
Vaccine

QCOSTARICA - A new batch with 124,020 doses of the covid-19 vaccine landed Tuesday night, as part of the weekly deliveries from Pfizer. With this...
Nicaragua

TODAY NICARAGUA – The Observatorio Ciudadano (Citizen Observatory) report revealed this Friday, May 7, 878 new suspected cases of infection with the virus and...
HQ

QCOSTARICA - Small groups of protesters tried to block several routes in the country on Monday, but the Fuerza Publica (National Police) managed to...
HQ

QCOSTARICA - Frequently the 911 emergency services receive calls reporting street brawls, "pleitos" in Spanish, and most are made from San José. And many...