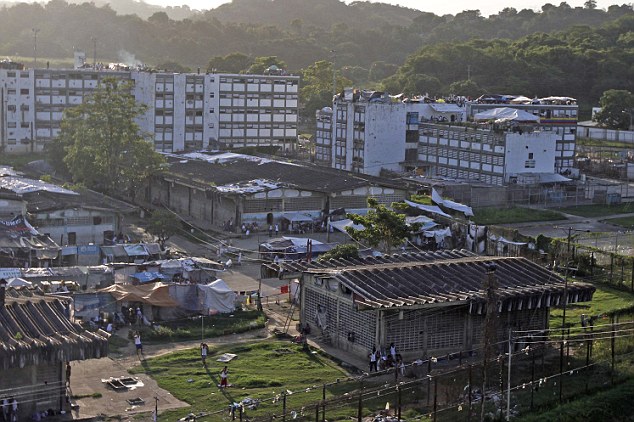 A newspaper investigation exposed how a prison in Venezuela has become a thriving marketplace for the basic goods in short supply throughout the country, a brazen display of how prison crime bosses are increasingly projecting their power outside the penitentiary system.

El Nacional has revealed that many residents in Aragua state have taken to visiting Tocorón prison to do their shopping amid mass shortages of food and essential goods nationwide.

The newspaper describes how the prison’s passageways have become an open market, with vendors selling everything from shampoo to cheese to visiting family members of prisoners and others there simply to buy groceries.

According to El Nacional, most of the merchandise is brought into the prison by hijackers who rob trucks on the outside, and who maintain relations with the prison “Pran” — the inmate who runs the prison as a criminal fiefdom.

Other prison-sourced products come from community associations set up by the government to distribute goods during the chronic shortages, known as Local Supply and Production Committees (Comités Locales de Abastecimiento y Produccion). Prisoners intimidate these association members into sending them supplies, according to El Nacional.

Each of the vendors must pay the Pran a hefty fee to operate, reported El Nacional, but can nevertheless bring in lucrative profits. Some are not even prisoners, but like their customers are allowed easy access to the prison due to official corruption. Guards are paid to allow them to enter without so much as registering their names and identification numbers, according to El Nacional.

Many of Venezuela’s prisons are essentially prisoner-run facilities, with the power of the authorities not extending much further inward than the perimeter walls. Tocorón is one of the most extreme examples of this; in addition to the new market places, there is also a nightclub, swimming pool, and a prisoner “bank,” according to media investigations.

Such prisons are domains of the Pranes. These prisoners have risen to the top of the inmate hierarchy to run lucrative economies within the prisons, charge other inmates “taxes,” regulate prison life and maintain some semblance of order, often via the use of brutal violence.

In recent years, there have been growing signs the Pranes have begun to extend their reach outside of the prison system, using the prisons as a base for running drug sales, extortion and kidnapping networks.

The fact that at least one Pran has turned a prison into a contraband market place for the general population confirms their influence reaches beyond the prison walls. In addition, it demonstrates how the current economic and security chaos of Venezuela has created ideal conditions for organized crime to flourish, and how criminal networks are exploiting the gaps left by a government focused on little more than political survival.