What Does Colombia Peace Deal Mean for Cocaine Trade? 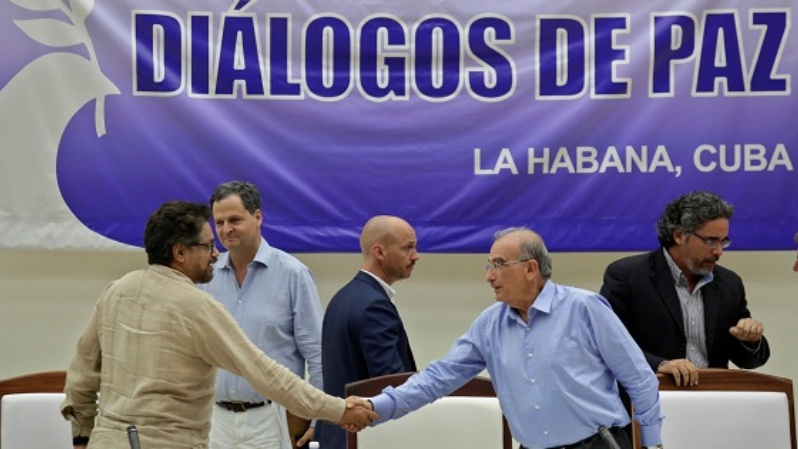 A peace agreement between Colombia‘s government and the country’s largest rebel army has been reached, and while the end of the five-decade old civil war has immense political and social implications, it’s not clear what is going to happen to the criminal economies that have sustained thousands of rebels.

The agreement between the Revolutionary Armed Forces of Colombia (Fuerzas Armadas Revolucionarias de Colombia – FARC) and the government came after almost four years of negotiations. And although the formal agreement will not be signed until next month, there are already questions about what happens to an immense criminal economies present where the FARC operates.

At the top of this pyramid is the cocaine trade. President Juan Manuel Santos stated during his nationwide address following the signing of the accords August 24, that as part of the agreement “the FARC have committed to breaking the link” with drug trafficking. But while the president talked about Colombia starting a new chapter of peace, InSight Crime is looking at the new criminal chapter that will begin once the FARC leave the stage.

The importance of the FARC in the world cocaine trade is hard to underestimate. They control up to 70 percent of the coca crops in the country (which total between 96,000 and 159,000 hectares depending on whether you use figures from the United Nations Office on Drugs and Crime – UNODC or the White House) and thus around 40 percent of the total world supply of cocaine.

The FARC also have a monopoly in their areas of influence on the trade in coca base, the sticky paste that is later transformed into powdered cocaine. A decent chemist can turn a kilogram of high quality coca base into a kilogram of crystalized cocaine, ready for export. Many FARC units, or “fronts” as they are called, trade cocaine as well as coca base. At least seven FARC fronts are involved in the export of cocaine and directly feed the world drug market. In sum, it is safe to say that the FARC are the single most important organization in the world cocaine trade.

A series of signatures in Havana is not going to bring an end to this trade. But there is going to be a seismic shift in the supply side dynamics of illegal drugs in Colombia.

While cocaine provides the bulk of the rebels’ earnings, the criminal economies under the FARC control are not restricted to illegal drugs. They also control illegal and legal gold mining activities and systematically extort thousands of individuals and businesses.

InSight Crime estimates that the total worth of the criminal economies in areas currently under FARC influence is in excess of a billion dollars annually. Of this, the guerrillasused $300 million for war, but another $300 million ended up in the pockets of individual FARC members, their families, friends and associates; and the rest went to other criminal actors that worked alongside the FARC.

To break the “link” to the drug trade and end the fighting, the agreement calls for the creation of 23 zones (formally called “Transitory Hamlet Zones for Normalization”) and eight camps where demobilized rebels will concentrate. But will all their commanders leave their lucrative areas? And what will happen to the all the FARC’s criminal economies when and if the armed fighters leave these territories?

We at InSight Crime are exploring five different scenarios, all of which could come to pass:

1. Elements of the FARC proclaim themselves as dissidents and stay in the field using the FARC name. This has already been seen with the First Front.

2. Colombia’s remaining rebel group, the National Liberation Army (Ejército de Liberación Nacional – ELN), receives a massive boost from criminal income currently under FARC control, especially in more than 60 municipalities where the two guerrilla armies co-habit. There might also be a significant transfer of FARC fighters and weapons to the ELN as many decide that the peace agreement does not appeal to them, and they opt to remain in the “revolutionary struggle.”

3. A new generation Colombian transnational organized crime (TOC) syndicates — known in Colombia as the BACRIM (after the Spanish words “bandas criminales” — absorb FARC elements and territory. These groups were born after the last peace agreement in 2006, between the government the paramilitary army of the United Self-Defense Forces of Colombia (Autodefensas Unidas de Colombia – AUC).

4. Elements of the FARC are seduced by international TOC, which are key players in the international cocaine trade. Foremost among these are Mexico’s Sinaloa Cartel; Brazil’s mighty prison gangs of the First Capital Command (Primeiro Comando da Capital – PCC) and the Red Command (Comando Vermelho); Venezuela’s “Cartel of the Suns” (Cartel de los Soles); and European mafias, such as Italy’s ‘Ndrangheta along with the Serbian and Albanian mafias, which are stepping up their involvement in the cocaine trade. Many of these organizations, particularly the Mexicans, already have direct links with FARC fronts (like the 57th, the 29th, the 30th and 48th) and could offer local FARC leaders money, weapons, communications equipment and anything else they might need to retain their military capacity and territorial control — anything to maintain the flow of cocaine.

5. Elements of the FARC that have been collecting extortion money (“taxes”) from the drug trade and from mining proceeds decide to stay in business and keep the proceeds for themselves. This we call the “FARCRIM” option, a mirror of the BACRIM born from the AUC. These groups would likely form organized criminal syndicates in their areas of influence.

In the aftermath of the AUC demobilization, some 36 BACRIM were formed. There was a wave of violence unleashed as these different groups fought each other for control of the most important criminal real estate. Today there is one dominant BACRIM, the Urabeños (who call themselves the Gaitanista Self Defense Forces of Colombia – Autodefensas Gaitanistas de Colombia – AGC). The Urabeños have more than 2,500 armed fighters. Working alongside them is a host of smaller regional organized crime groups.

There may well be another wave of violence as the underworld recomposes itself around the FARC‘s formal departure from the lucrative criminal economies they control. Yet today there is a form of “Pax Mafiosa” in the country, with very little fighting between criminal actors, who now prefer to cooperate and share the profits than fight for control. The FARC are already part of this world, providing BACRIM and TOC with coca base and cocaine. These relationships are unlikely to die with any agreement in Havana. They will more likely evolve and give birth to a new generation of criminal actors, some of which will inevitably have FARC roots.

This is not new to Colombians where illegal actors have been regularly recycled in the past. When the Popular Liberation Army (Ejército Popular de Liberación – EPL) demobilized in 1991, several elements stayed in the field, and one is still active in the Norte De Santander Department along the border with Venezuela, deeply involved in the drug trade. Other EPL fighters joined the prototype paramilitary group known as the Peasant Self Defense Force of Córdoba and Urabá (Autodefensas Campesinas de Córdoba y Urabá – ACCU). The ACCU gave birth the paramilitary army of the AUC. The AUC demobilized and gave birth to the BACRIM.

The question is can the government prevent or at least minimize the risk of a new generation of criminal actors being born from the FARC?