Venezuela;s foreign minister, Elías Jaua, said elections will be called in 30 days and that Executive Vice-President Nicolás Maduro will take temporarily the presidency after the death of Hugo Chávez. 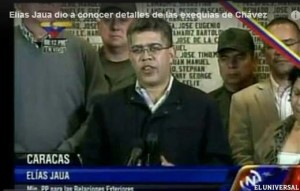 Jaua insisted that Maduro will be the ruling party’s candidate for the next presidential election. “It is the mandate Commander President Hugo Chávez gave us,” he saed.

“What should be done is stated very clearly. Now, since there is a complete absence, the vice-president will take over as president, and call an election within the next 30 days. It is the mandate Commander President Hugo Chávez gave us on 8 December. He asked us the Bolivarian revolutionaries, the Venezuelans, to accompany Nicolás Maduro, and that’s what we’ll do,” he said.

Jaua said he was sure that Chávez passed away in peace. “Dying here, leading the Venezuelan people, was his last mission.”

Jaua’s announcement does not coincide with the provisions of the Venezuelan Constitution, which expressly states that in the case of absence of the President, the Government must temporarily assumed by the president of the National Assembly, a position currently held by Diosdado Cabello, and election officials must call elections within 30 days.

EXPAT FOCUS (MND) Of course it was no surprise that readers of Mexico News Daily voted Mexico as the No. 1 expat destination in...
Politics