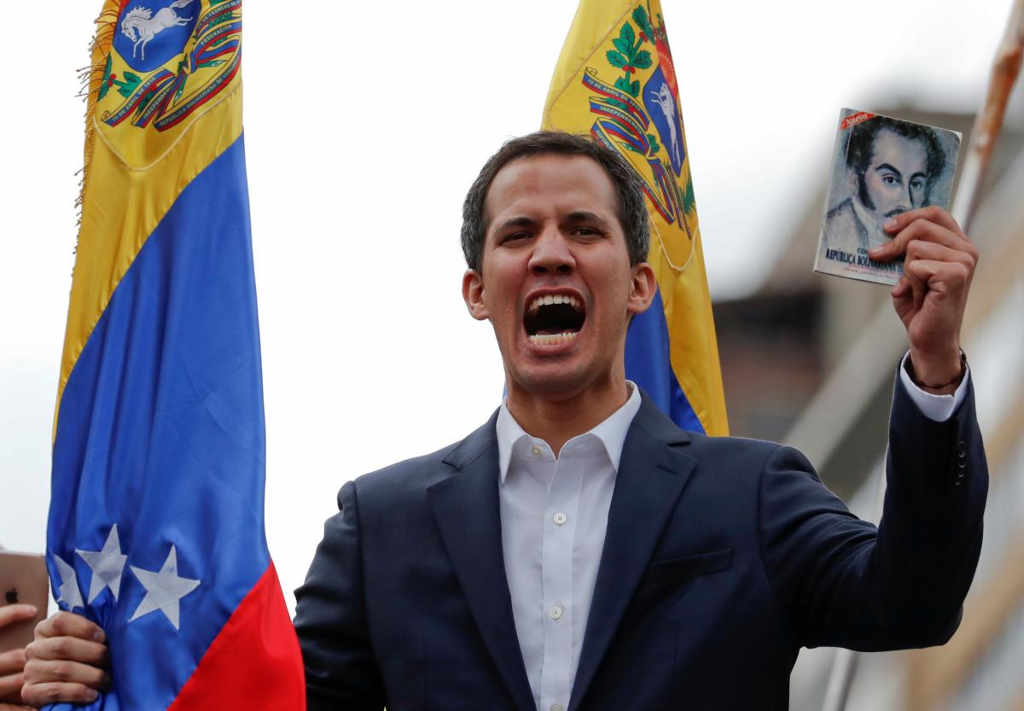 Venezuelan opposition leader Juan Guaido declared himself interim president on Wednesday, with the support of the United States and many Latin American nations and prompting Nicolas Maduro to break relations U.S. and giving its personnel 72 hours to leave the country.

U.S. President Donald Trump formally recognized Guaido shortly after his announcement to hold elections. That was swiftly followed by similar statements from Canada and a slew of Latin American governments, including Venezuela’s neighbors Brazil and Colombia.

At a rally that brought hundreds of thousands of Venezuelans into the east of Caracas, Guaido said Maduro had usurped power and promised to create a transitional government that would help the country escape its hyperinflationary economic collapse.

“I swear to assume all the powers of the presidency to secure an end to the usurpation,” 35-year old Guaido, the head of the opposition-run congress, told an exuberant crowd.

Guaido’s declaration takes Venezuela into uncharted territory, with the possibility of the opposition now running a parallel government recognized abroad as legitimate but without control over state functions.

In a televised broadcast from the presidential house, Maduro defaulted to accusing the United States of supporting a coup by the opposition and wanting to govern Venezuela from Washington.

“We’ve had enough interventionism, here we have dignity, damn it! Here is a people willing to defend this land,” said Maduro, flanked by top Socialist Party leaders, although the defense minister and members of the military high command were absent.

Diplomatic pressure. Maduro started a second term on January 10 following a widely-boycotted election last year that many foreign governments described as a sham and did not recognize Maduro’s swearing-in for a second term.

Venezuela’s constitution says if the presidency is determined to be vacant, new elections should be called in 30 days and that the head of the congress should assume the presidency in the meantime.

However, the Supreme Court has ruled that all actions taken by Congress are null and void and Maduro’s government has previously accused Guaido of staging a coup and threatened him with jail.

“I will continue to use the full weight of United States economic and diplomatic power to press for the restoration of Venezuelan democracy,” Trump said in his statement, that could include imposing sanctions on Venezuelan oil as soon as this week, according to sources.

Venezuela has the largest crude reserves in the world and is a major supplier to U.S. refiners, though output is hovering near 70-year lows and reaction in the oil markets was muted on Wednesday.

Today, I am officially recognizing the President of the Venezuelan National Assembly, Juan Guaido, as the Interim President of Venezuela. In its role as the only legitimate branch of government duly elected by the Venezuelan people, the National Assembly invoked the country’s constitution to declare Nicolas Maduro illegitimate, and the office of the presidency therefore vacant. The people of Venezuela have courageously spoken out against Maduro and his regime and demanded freedom and the rule of law.

I will continue to use the full weight of United States economic and diplomatic power to press for the restoration of Venezuelan democracy. We encourage other Western Hemisphere governments to recognize National Assembly President Guaido as the Interim President of Venezuela, and we will work constructively with them in support of his efforts to restore constitutional legitimacy. We continue to hold the illegitimate Maduro regime directly responsible for any threats it may pose to the safety of the Venezuelan people. As Interim President Guaido noted yesterday: “Violence is the usurper’s weapon; we only have one clear action: to remain united and firm for a democratic and free Venezuela.”