Victim of sexual abuse in Cartago: “this has to stop”

"He whispered in my ear‘ que rico! ’And put his hand under my dress". Karla Garro assured that it is outrageous not to be able to feel safe even at 9 am when she is on a public road with her children.

"He whispered in my ear‘ que rico! ’And put his hand under my dress". Karla Garro assured that it is outrageous not to be able to feel safe even at 9 am when she is on a public road with her children.

(QCOSTARICA)  “I was walking and pushing my six-month-old son’s stroller and my 11-year-old daughter was riding a bicycle. As I stop to get the stroller onto the sidewalk in front of my house, ‘un infeliz’, because I don’t know what else to call him, whispers in my ear ‘‘qué rico’ and puts his hand under my dress.

“I turned around and faced him, I said, ‘What’s wrong, you idiot? and what he did was take out a weapon he was carrying, I got very scared and started screaming. My husband came out and chased him, but we couldn’t find him.”

Karla Vanessa Garro Quirós, 29,  described what she experienced Wednesday morning, in front of her house, in San Francisco de Cartago, when the man who was riding a bicycle sexually abused her.

Every day, she goes out with her baby, and her daughter riding her bike around the neighborhood.

Wednesday morning, her outing included getting some photocopies made near the José Rafael Fello Meza Stadium and, on her return, in front of her house, the man on the bicycle reaches out and puts his hands under her skirt.

The events were captured on several neighbor’s security cameras, to which by noon she filed a complaint at the Cartago courthouse.

Garro considers it inconceivable that even at the door of her house she can no longer feel safe and believes that it is everyone’s fight to combat sexual abuse.

This is the first time something like this has ever happened to her, in a neighborhood that, until now has not such reports.

Unlike some victims of sexual abuse, Garro decided to speak out.

“We do not have to remain silent, it is not our fault, nor whether we are wearing short or long clothing, whether we are skinny, fat, that doesn’t matter, society is wrong and the one who did this to me is a depraved man, a degenerate, this has to end now,” she stressed.

“This has to stop, it is necessary that the authorities listen to us, take care of us, protect us. It cannot be that I, with my two children, go out and a disgusting person does this (…)”, she concluded.

Although she could not be sure, Garro says she may have seen him already passing through the neighborhood several times. What bothers her the most is that the man pulled out a knife when she reacted.

Thursday afternoon the Organismo de Investigacion Judicial (OIJ) had their man, identified as  Villarreal Gutiérrez, 48, who had already served jail for rape. 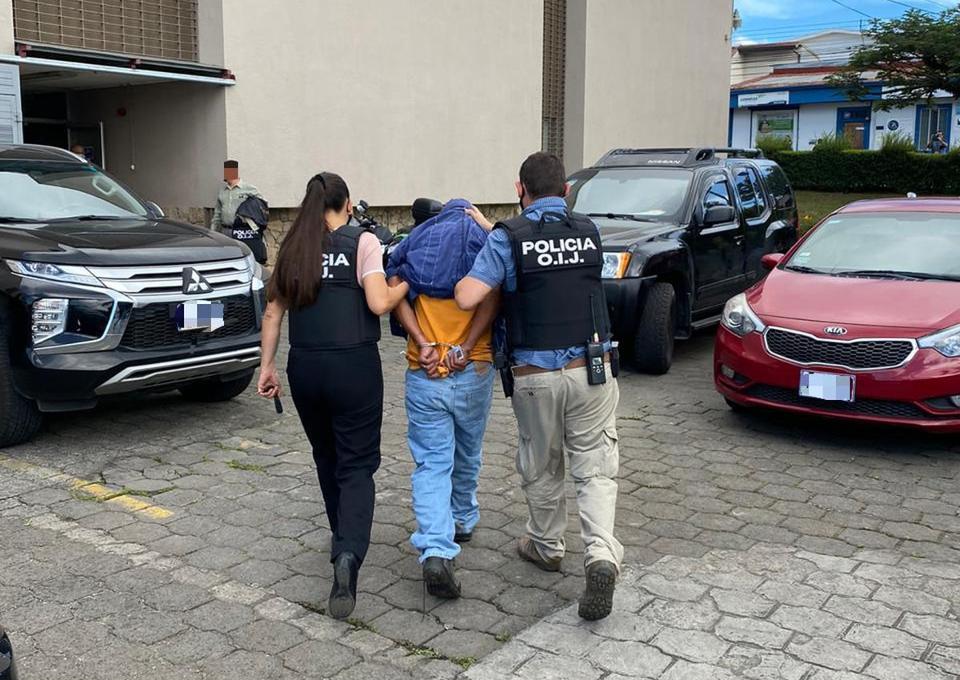 The man, a native of Quepos, was confirmed to have spent 10 years in prison until 2016 when he was released.

Villarreal was sentenced in June 206 to a 13-year prison sentence for rape, against a minor who suffered from mental retardation. He also faced other cases that he served out with alternative sanctions, police sources confirmed.

In 2009, while in prison, Villarreal was part of a group of 26 prisoners who asked the Constitutional Chamber for the right to have their vote for local elections. The appeal was rejected.

On Thursday the OIJ received confidential information about his identity and whereabouts, in the district of Llanos de Santa Lucía in Paraíso, Cartago.

The amendment to the Penal Code in effect since August 10 last, “Ley contra el Acoso Sexual Callejero” (Law against Street Sexual Harassment) provides penalties of eight months to one year in jail against those who generate conduct with a sexual connotation and with a unidirectional nature, without the consent or acceptance of the person or persons to whom they are directed in public spaces.

This is intended to prosecute people who previously went unpunished of acts such as exhibitionism, taking photos of a sexual nature without consent and uttering profanity or vulgarities, among others.

For example, a prison sentence awaits anyone who, “in a public space, with public access, or in a means of paid transportation for people, persecutes or corners another person with sexual connotations.

Likewise, anyone who, in a public space or on a paid means of transport, records, captures or produces audiovisual material with sexual connotations of another person, without their consent. The penalty could be up to three years in prison if such material was sent, displayed or transmitted to a third person.

This legislation obliges the police forces to intervene “ex officio and without delay, in situations of street sexual harassment”.

It also provides that the police forces must help victims of harassment in identifying the alleged perpetrators.

Since the law was enacted five weeks ago, ten people face prosecution.

QCOSTARICA - The tolls on ruta 27 will increase...