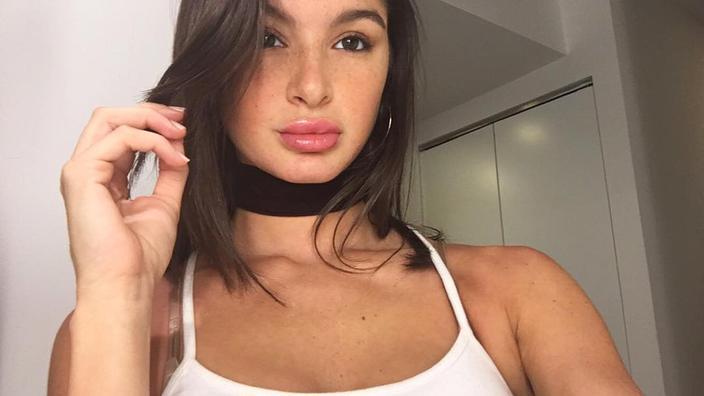 COSTA RICA EXTRA (Hollywoodlife.com) The jig is up! Bella Banos claims she’s the mystery woman who joined Scott Disick during his Costa Rican trip with the Kardashians. The bikini model says they’re ‘in love’ and have known each other for two years! Here’s all the juicy details!

It looks like Scott Disick, 33, is already off the market! Bella Banos, 20, claims she is the gorgeous mystery woman who joined the reality star for his Costa Rican vacation on Feb. 3. The model says Scott invited her to the very same hotel where Kourtney Kardashian, 37, and the rest of her family were filming Keeping Up With The Kardashians. “He always flies me to wherever he is. We spend so much time together,” Bella tells In Touch. “Scott will call and say, ‘I miss you. I want to see you.’” She also shockingly said, “Scott calls me his girl and we have said “‘I love you.’”

Bella says she met the reality star two years ago through one of her exes and they’ve stayed in touch ever since. Their recent PDA allegedly caused an explosive fight between Scott and the Kardashians, prompting him to leave the holiday excursion early. Kim Kardashian, 36, and Kris Jenner, 61, were reportedly the most upset by his unsettling behavior, since they found it “disruptive and disrespectful” for Scott to bring a random girl on their family trip!

Scott continued spending time with a bevy of beauties in Miami following the vacation, getting handsy and cuddling with not one, but two different girls while sunbathing by the pool! This shocking sighting came after Scott lived it up with a party-fueled weekend in Sundance.

Fans can barely wrap their heads around the latest news, since he recently proclaimed his undying love for Kourtney. “I will never be over her,” Scott gushed in the new teaser of KUWTK. “She’s the love of my life.” However, Bella claims Scott told her “they’re just friends.” As far as the other women go, Bella explained, “Nothing sexual has gone on between [those girls] and Scott.”