Zoo Ave Animal Rescue shelter at La Garita got a new star this week—a cute, voluptuous but nervous appearing young female, less than 10 inches tall. It is an albino squirrel, blindingly white even up to its twitching tail. 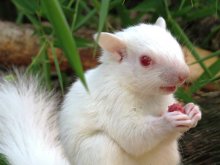 Donated by a Desamparados resident, the little creature is literally a one-in-a-million chance, according to Sergio Gonzalez, spokesman for the shelter — a squirrel born without melanin, the pigment cells that determine the color of all mammals.

The little lady is probably lucky to have been brought in from the wild—in nature, she would have stood out as conspicuously as a polar bear at a nudist convention. White fur in the tropics is not wise camouflage.

But not only that, albinos are ultra sensitive to the ultraviolet rays of the sun and their sight is usually too weak to detect a predator before he detects his prey, again, especially in the sun’s glare.

This is totally unlike the fugitives that Zoo Ave usually gets, animals that should never have been taken out of the wild and are either brought in or confiscated by authorities after their owners set them free. They usually are totally out of place in captivity.

Since nature exercised such showmanship with this petite female squirrel, Zoo Ave has decided to do so itself.

“We’re going to launch a contest on Facebook where people can propose a name for her and later vote for the winner,” says Gonzalez.

QCOSTARICA - American Airlines announced that starting November 2, 2021, it will offer a direct flight between Austin, Texas and the Daniel Oduber International...
Peru

QCOSTARICA - Costa Rican President Carlos Alvarado is just another citizen when it comes to covid-19 vaccination, given his young age and good health,...
Expat Focus