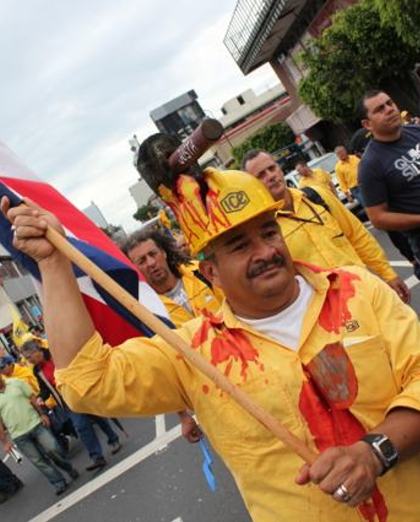 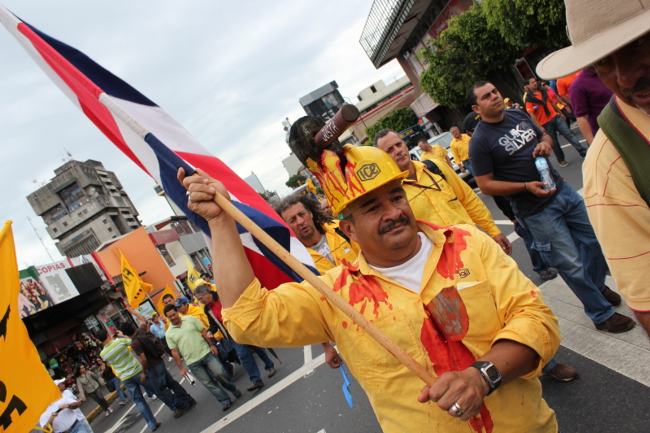 The Frente Interno de Trabajadores del Instituto Costarricense de Electricidad (FIT.ICE) – the state telecom workers unions – said that it is adamant that it will not rest until the cell phone number “portability” agreement is canceled.

On Monday, thousands of ICE workers gathered in front of the company’s main offices in La Sabana and then moved along Paseo Colon and Avenide Segunda, to end up at the Legislative Assembly to deliver legislators a letter requesting their intervention in getting the contract with the Spanish company, El Corte Ingles, cancelled.

Earlier this year, the Superintendencia de Telecomunicaciones de Costa Rica (SUTEL) – communications regulator – awarded the contract to the Corte Ingles to operate the cell number portability and required all the operators to sign a contract to that end.

Claro and Movistar signed almost immediately. ICE, however, stalled and stalled, signing the deal only last Friday, some say under the threat of a US$10 million dollar fine.

The signing of the agreement prompted the workers unions to unite and call for a day of strike and a vow to work together towards having the contract cancelled.

Number portability allows customers of cellular telephone services, of both postpay and prepay, to switch operator and keeping the same number.

The Corte Ingles, under the concession contract with the SUTEL, will manage the number database and the process of switching operator.

ICE, being the biggest mobile operator has the most to lose, since a large majority of its customers have had the same number for years, and many have not switched simply so as not to lose their number.

For Claro and Movistar, they may lose some customers but have the advantage of picking up a large block of customers not satisfied with the service provided by ICE.

QCOSTARICA - For today, Saturday, September 11, there are...
Health