Ambassador To Costa Rica Attempts Sex With A Minor

QCOSTARICA – An ambassador to Costa Rica is reported being denied a room by a luxury hotel in San Jose when he tried to check in with a minor.

The information, according to reliable sources, was released to the public during a meeting of various institutions that form part of the Codigo Conducta (Conduct Code) by the Cámara Costarricense de Hoteles (Hotel Chamber) and the Patronato Nacional de la Infancia (PANI) – child welfare agency, through its Paniamor foundation, to combat sexual exploitation of minors.

According to the discussions in the meeting of the group, the diplomat, whose identity was not revealed, arrived in the company of a minor at luxury hotel at a Greater Metropolitan Area of San Jose (name of hotel was not given).

When the young woman was asked for her cedula, the identification document issued to every adult Costa Rican, she told the hotel staff she could not do so, for she was under age (under 18). The diplomat was immediately asked to leave the premises. The hotel staff alerted authorities.

The Minister of Foreign Affairs, Manuel Gonzalez, has not referred to the subject in public. In fact, Daniel Chinchilla Salazar, journalist for the Diario Extra, who reports the story, says he tried to contact the minister, but despite multiple attempts had not be able to talk to him.

For her part, Flora Ayub, executive director of the Hotel Chamber, told Chinchilla told Chinchilla she could not refer to the case, since she does not remember having received such ‘delicate’ information, only saying that the hotels associated with the Chamber are committed to a zero tolerance when it comes to the sexual exploitation of minors.

Curiously, on Wednesday, Casa Presidencial (Government House) on Wednesday unveiled the Paniamor promotion called “Unforgettable Costa Rica“, a website with the message that if you come to Costa Rica looking for sex with minors, the state will you give you a free stay: room and board and a great view from one of its jails. 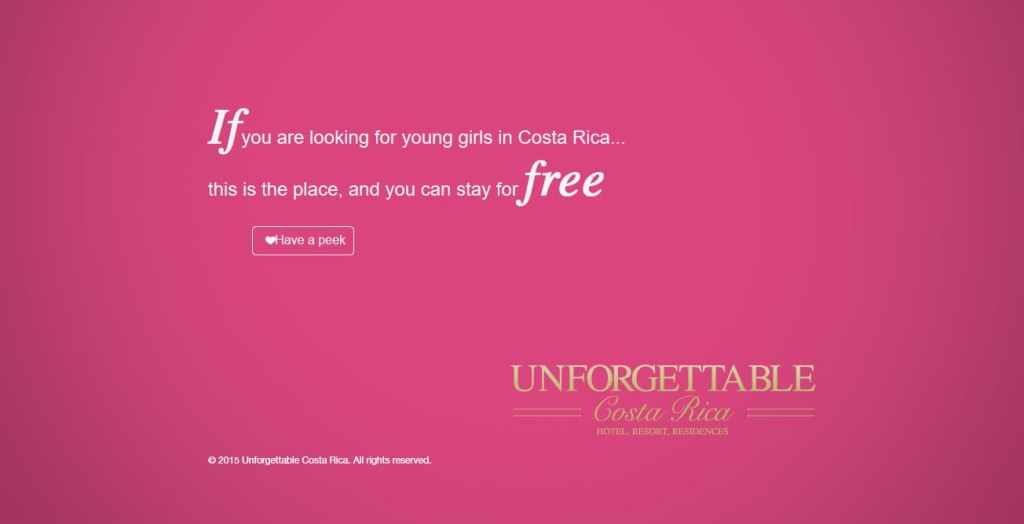 At first glance the website looks like any other travel website promoting Costa Rica. What is odd is that the front page says invites visitors “for young girls in Costa Rica … this is the place, and you can stay for free“.

On the next page of the website the visitor learns that the accommodations are a jail cell, the fine dining is a food tray with plastic cutlery, the spa & wellness is a communal shower, recreational activities are within the confines of a fenced in concrete courtyard and the view is through a metal fence.

Milena Grillo, executive director of Paniamor Foundation, was emphatic that Costa Rica, across different institutions, has declared war on the sexual abusers of minors.

Do you know anyone who handles stress really well?...
Economic Recovery